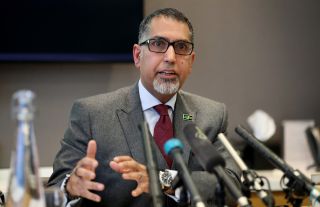 Kick It Out chair Sanjay Bhandari has called for sharing of data to help the fight against discrimination and highlighted online abuse as a particular area of concern.

The equality and inclusion charity has published its latest annual findings and revealed 2019-20 saw a 42 per cent increase in reports made to it of discrimination at matches in the professional game.

That is despite the impact on the season of the coronavirus pandemic, with games after the suspension in March being played without fans present and other fixtures cancelled.

Also, among the results of a YouGov poll with fans launched by the charity was 71 per cent saying they had witnessed racist comments on social media directed at a footballer.

The charity has described the picture painted by the figures released as “shocking”, and Bhandari told the PA news agency: “We’d always suspected that what we have is just the tip of the iceberg and that actually the scale of the problem is much bigger.

“The YouGov poll has given us a bit of an indication of what is below the water line, and that this is a much more pernicious threat than even we had thought.

“The fact racism and discrimination exists in society and football causes us to be angry and disappointed. What we need to do is use that anger as an energy, and data and analytics as our strategy for helping to solve the problem, and where we need to focus our attention is on solutions.”

While the resumption of the season saw players taking a knee in support of the Black Lives Matter movement following the death of George Floyd in the United States, in July Crystal Palace’s Wilfried Zaha and Sheffield United’s David McGoldrick were sent racist abuse on social media.

Bhandari added: “Football has its responsibility and its part to play in tackling the challenges. I think the death of George Floyd has changed things. I really do feel this time it could be different.

“I think in terms of tackling discrimination there is much more to do, and that in particular we need clubs, governing bodies, law enforcement to share data with us, and if we can do that; better data, better insights, better solutions.

“We really need to get a more detailed understanding of how much of this is a kid in their bedroom abusing Wilf Zaha or (former England and Arsenal striker) Ian Wright (who highlighted abuse he had received in June), and how much of it is organised, who is organising, what are their motivations.”

Bhandari has spoken about how social media “can be a battleground of hate”, and he said: “Particularly I think at the moment it is tackling hate online and in social media and having a more connected strategy to deal with that.”

He has said there is a need for better regulation and enforcement, and for social media companies to be “part of the solution”.

Bhandari said he would encourage players to “continue to exert pressure until people act and deliver”, and added: “I hope players will continue to feel free to protest in the way they feel comfortable.

“The thing I’d most like to see next season is action. We’ve had lots of gestures, but it has to be converted into meaningful action.

“My challenge to everyone is: this is what we’re going to be doing – campaigning, creating talent programmes, doing advocacy, working with government, law enforcement, clubs and governing bodies – but what are you going to do individually, how are you going to take a stand?”

At grassroots level, the number of reports to the charity was down from 113 to 94, but that was with seasons ending in March, and comparing it to the equivalent period in 2018-19, there was an 11 per cent increase.

Paul Elliott, chair of the Football Association’s inclusion advisory board, said: “The FA has made huge strides in recent years to ensure that English football is a diverse and inclusive game, but we know there is more to be done.

“We strongly condemn all forms of discrimination and, while only participants fall under the FA’s jurisdiction, we investigate all reported forms of discriminatory abuse in English football at every level of the game, and work closely with the relevant authorities to ensure matters are dealt with appropriately.”