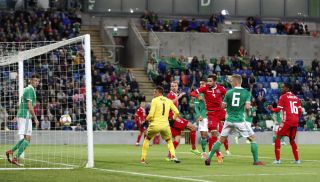 A horror own goal from Kevin Malget was enough to give an experimental Northern Ireland side a 1-0 victory over Luxembourg in their Windsor Park friendly.

Malget inexplicably headed into his own net eight minutes before half-time to settle a match short on quality as both sides looked to more important challenges to come on Monday.

For Northern Ireland, that is a Euro 2020 qualifier against Germany, a match which loomed large in Michael O’Neill’s thinking as he sprung a few surprises in a youthful starting line-up.

Cardiff defender Ciaron Brown – uncapped at any level and only called into Ian Baraclough’s under-21s squad last week – started and looked assured as O’Neill made eight changes to the side that beat Belarus in June.

Corry Evans, captain for the night, survived, along with goalkeeper Bailey Peacock-Farrell and Josh Magennis, but the likes of Jonny Evans, Craig Cathcart and Conor Washington did not even make the matchday squad.

Instead, the uncapped Bobby Burns, Alfie McCalmont and Ethan Galbraith took their places among the substitutes.

Kyle Lafferty, who only flew in to Belfast on Wednesday evening after his late call-up, was thrown straight into the starting XI and looked strong despite having only started one match for his new Norwegian club Sarpsborg and seeing his debut ended by a red card 69 minutes in.

Unsurprisingly it took Northern Ireland some time to bed in as Luxembourg, preparing for their own European qualifier against Serbia, kept them pegged back early on.

A Jordan Thompson free-kick caused chaos after quarter of an hour when goalkeeper Anthony Moris came way off his line but missed the ball, but Magennis was crowded out as Brown tried to find him with a header.

Better chances began to appear for Northern Ireland after the half-hour mark, although Gavin Whyte sent the best of them well over the crossbar from an angle.

O’Neill’s side would not manage a shot on target in the opening 45 minutes, but they would take the lead before the break thanks to Malget’s own goal.

George Saville headed the ball back into the mix after Luxembourg failed to deal with a corner.

Though goalkeeper Moris beat Tom Flanagan to the ball, it span up before Malget inexplicably headed into his own goal.

Luxembourg were again stronger to start the second half, with Vincent Thill and Leandro Martins getting the first shots on target of the night, but neither tested Peacock-Farrell.

O’Neill responded by sending on Shayne Lavery for his second cap and McCalmont for his debut.

Lavery, just a couple of weeks after scoring a superb goal on this ground for Linfield in their Europa League qualifier against Qarabag, was quick to impress.

He raced down the right before brushing the side-netting with a shot from a tight angle before his low cross from the left deserved a better finish than Thompson’s rising effort.

Liam Donnelly – who has scored eight goals in eight for Motherwell to start the season – then came on for his second cap and almost got his first international goal soon after.

Luxembourg’s substitute goalkeeper Ralph Schon collided with his own defender and spilt the ball before making a smart save to deny Donnelly on the follow-up.

Galbraith came on to make his debut with three minutes remaining as Steven Davis also enjoyed a late cameo to equal Aaron Hughes’ tally of 112 caps on the night the former defender had been honoured at half-time.

They had little time to make an impact but Northern Ireland had already done enough to extend their winning run to five games before facing the mighty Germany next week.