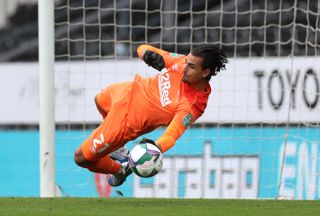 Barrow’s return to English Football League action after 48 years ended in heartbreak when they were knocked out of the Carabao Cup by Derby on penalties.

The tie was goalless after 90 minutes although Barrow had two great first-half chances while Derby had the bulk of possession but created little.

Dior Angus tucked away the opening spot-kick but Kelle Roos saved three penalties and although Joel Dixon denied Jack Marriott and Max Bird, Morgan Whittaker made no mistake to take Derby through 3-2.

Derby skipper Wayne Rooney was out injured and full-backs Jayden Bogle and Max Lowe, who have been linked with a move to Sheffield United, were left out of the 18-man squad.

The Championship club dominated the early possession but Barrow had the first attempt on goal when Joshua Kay fired over from 20 yards in the 12th minute.

The league newcomers had two great opportunities in the space of two minutes but failed to take them as they got behind Derby’s defence with alarming ease.

A quick break in the 20th minute saw Angus outpace George Evans but a heavy touch allowed Roos to smother his shot.

Derby were exposed again when Jack Hindle was clear on the right but his attempted chip floated wide when he should have hit the target.

Those let-offs stung Derby into a response that saw Marriott have a shot deflected wide before Craig Forsyth’s low cross went behind off a defender.

From the 37th-minute corner, Matt Clarke put a free header wide and although Jason Knight tested Dixon just before the break, the best chances had gone to Barrow.

There was another scare for Derby in the 57th minute when Hindle made some space just outside the box and curled a shot wide.

Derby went close in the 74th minute as Marriott’s shot from 10 yards was deflected over and the striker failed to connect with a low cross five minutes later.

Barrow came under increasing pressure but Derby’s final ball was poor and the tie went to penalties.

Angus and Evans scored the first two spot-kicks but Roos denied Scott Wilson and Lewis Hardcastle while Dixon saved from Marriott and Bird.

Harrison Biggins and Graeme Shinnie both scored but Roos denied Hindle and Whittaker kept his nerve to give Derby a victory they barely deserved.