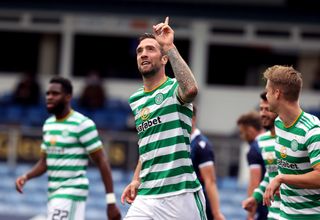 Celtic and Rangers enjoyed resounding wins while Hibernian and Aberdeen kept up the pressure and Motherwell secured their first three points only for Hamilton’s late winner against Livingston to keep their Lanarkshire rivals bottom.

Here are five other things we learned from the weekend’s action.

Losing three goalkeepers is a bridge too far

Will not make excuses about today’s result, but this week has been one of the hardest weeks in my professional career. To lose 3 GKs through no fault of their own and still expect the team to play is incredible. Sometimes you just need some common sense.— Jamie Langfield (@jamlang22) September 12, 2020

Facing the prospect of playing an outfield player or coach Jamie Langfield in goal after losing all three keepers to coronavirus blows, St Mirren were forced to go into the emergency loan market ahead of the visit of Hibernian. Zdenek Zlamal of Hearts joined the Buddies after the club failed to persuade the league to postpone their game after two keepers tested positive for Covid-19 and another was instructed to self-isolate. Zlamal endured a difficult debut as Hibs won 3-0 in Paisley.

Fans are back at last

After a six-month absence, supporters were back inside Scottish football grounds as Aberdeen and Ross County each hosted about 300 of their respective fans. The test events came came after a more general return was delayed by at least three weeks after areas of Scotland were pushed further back into lockdown. But the sight of supporters queuing up and sitting in a socially-distant manner will offer a glimpse of light at the end of the tunnel for hard-pressed clubs.

The champions were slow to get started in the transfer market but Neil Lennon’s squad looked strong as they won 5-0 against Ross County. Striker Albian Ajeti made it three goals in his first three league games, Republic of Ireland defender Shane Duffy headed home on his debut and goalkeeper Vasilis Barkas made several good stops. Former Motherwell midfielder David Turnbull also made a brief debut as he beds into his new surroundings.

The St Mirren boss recently claimed there was very little between eight teams in the top flight outside of Celtic and Rangers and then Hibernian and Aberdeen. The table more than supports his assertion. Fourth-placed Aberdeen are four points clear of the pack with two games in hand and only three points separate fifth-placed Ross County from bottom club Motherwell. Several clubs could find themselves simultaneously battling for top-six places and survival.

Gerrard is in a hurry to add to his squad

Rangers maintained their 100 per cent record and kept a record-breaking seventh consecutive clean sheet but their 4-0 win over Dundee United came at a cost. Alfredo Morelos, Ryan Jack, Brandon Barker and Leon Balogun all suffered injuries, the latter during the warm-up. Manager Steven Gerrard, already missing the likes of Allan McGregor, Joe Aribo and Niko Katic, warned the club would need to “accelerate” their transfer activity.