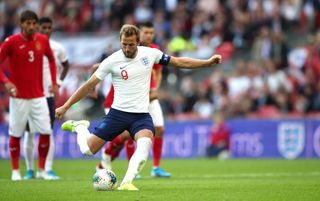 Kane scored a hat-trick in Saturday’s game against Bulgaria to move to 25 goals for his country, one ahead of World Cup winner Geoff Hurst.

The Tottenham striker is looking lean this season, having overcome injuries which dogged the build-up to Spurs’ Champions League final and the Three Lions’ Nations League finals.

Southgate said he would freshen his side up at St Mary’s, but Kane will not be one of those dropping out.

“In the end in the summer we decided that he wasn’t ready to start so I don’t think you can have a player that is undroppable, because that is a dangerous route for any team and it is not a healthy position for a player,” Southgate said.

“It is safe to say we won’t be dropping him for tomorrow. His level of performance is so high that dropping him would be a rare occurrence.”

On his team selection, Southgate added: “We might freshen the team a bit, that will be important.

“We don’t need to, everyone is fit and available. We need to make sure we get the balance right.

“We need to get the right attacking an defending profiles to make sure we win the game.”

The Three Lions obliterated Bulgaria at Wembley, but Southgate is expecting a different type of game against the surprise package of Group A.

“We are expecting a different sort of challenge to Saturday but one we are looking forward to,” Southgate said.

“It will be a very different style of game. Kosovo will be very high pressing, hard working – a more attacking threat than we faced on Saturday.

“Maybe there will be more space to play up front. Whatever we learned from Saturday’s game, this is a completely different challenge.”

The Three Lions are back on the road, travelling to Southampton for their first game at St Mary’s since 2002.

Southgate will be joined by @JHenderson for our pre-match media conference, which you can watch live from St. Mary's this evening.#threelionshttps://t.co/QbOBUCl1uN— England (@England) September 9, 2019

Southgate added: “We’re delighted to be coming down to Southampton to play.

“Our experience of taking the team around the country has been positive and we’re looking forward to a brilliant atmosphere.”

England’s form under Southgate – and their impressive start to qualifying – suggests that they will be among the favourites to win Euro 2020 on home soil next summer.

And midfielder Jordan Henderson is keen to add a winners’ medal with England to the
Champions League one he won with Liverpool in the summer.

“It would mean a lot, any trophy that I win, I will be over the moon,” he said. “That is all I ever want is to win, whether that’s at Liverpool or England.

“It means so much to me to win trophies or win as a team.

“To win a trophy in the summer was massive and huge for me and my team, for England that is what we want to achieve. We want to win trophies and be as successful as we can be.

“Hopefully one day we can do that.”