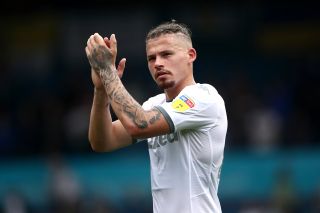 Kalvin Phillips will give his first England shirt to Marcelo Biesla after the Leeds boss handed his captain a Newell’s Old Boys jersey to commemorate his international call-up.

A shining light in the Leeds team which earned promotion back to the Premier League last season, Phillips was rewarded with inclusion in Gareth Southgate’s England squad for the Nations League double-header against Iceland and Denmark.

He was an unused substitute in the 1-0 win in Reykjavik, where Raheem Sterling’s late penalty made the difference.

The 24-year-old saw his game reimagined by Bielsa who changed him to play in a more defensive midfield role.

Phillips has excelled since the move and revealed the Argentinian had presented him with a special memento to mark his England call – once the 65-year-old had calmed down having discovered the number of players he was losing to international duty on the eve of the new season.

“He was kind of pulling his hair out because there were quite a few lads going off to internationals,” Phillips said of Bielsa.

“He was thinking he didn’t have enough time to prepare for Liverpool who, obviously, are the champions.

“So, he was pulling his hair out at the time but once he settled down he gave me a gift – one of his old playing shirts – and a message to my family and grandma, mum and girlfriend. That was a very nice touch for me.

“It’s an old playing shirt from when he used to play. He got me a replica of one of his shirts. I’m going to ask him to sign it.

“He sent me a little note as well, I’m going to get that framed. I’ve got loads of shirts in my house that I’ve put up round the games room in my house, so I’ll probably stick it up there.”

Asked what he would do with his first England shirt should the day come, Phillips added: “I’m giving it to the manager, Marcelo, as he gave me a shirt. I thought I’d give him a trade.”

Phillips, who is also eligible to represent Jamaica at international level, has yet to taste top-flight football.

But he admits he has been impressed by working at close-quarters with some of the Premier League’s best in England training sessions at St George’s Park in the last week.

“Yes, I think the first thing since I came in was they were doing possession (training) and stuff, we don’t really do that at the club,” he replied when asked if spending time with England will be good to see what he will soon be coming up against with Leeds.

“I was a bit blown away with just how fast the tempo was and how good the players were.

“I’ve got used to it a little bit and obviously I know it is going to be a tough season for us as Leeds United players and for me personally so I am always up for a challenge and will try and do my best with it.”

Phillips could become the first Leeds player to be capped by England since Alan Smith in 2004 – and that, too is something that has not gone unnoticed.

“It is massive for me and for my family as well, they are all Leeds supporters,” he added.

“They have supported Leeds for years as well as me. Even the club, everyone at the club was buzzing for me and very happy.

“The club is obviously a massive family and I have been there all my life so it is good for me and good for the club.”