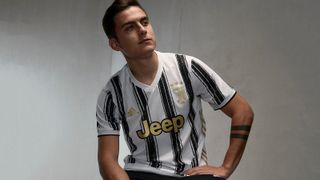 They're back. Following a couple of seasons featuring a "split" black and white design, Adidas have reintroduced the stripes formally synonymous with the Italian giants and it's a welcome move.

The new Adidas Juventus home shirt supposedly takes inspiration from Italy's contemporary art scene, with the striped design intended to give the shirt a "brushstroke" look. Juventus players and fans can also look forward to donning a shirt emboldened by the odd touch of gold, as well as black and white.

The official Adidas release explains the gold touches add "elegance to the iconic black and white" and can be seen "throughout the kit, including within the brushstrokes, club crest and sponsor detailing."

Juventus have long established themselves the best team in Italy, having sealed their ninth straight Serie A title this season. Fans will therefore expect to see the team lift a tenth title in their new gold-emblazoned home kit. Anything less than a win for Maurizzio Sarri's side will be seen as a colossal failure.

The new home jersey will be worn for the first time on pitch from Saturday 1st August, the final Serie A match of the season

TRANSFERS The position EVERY club needs to strengthen in this summer

GUIDE New Premier League kits 2020/21: every released home and away shirt so far