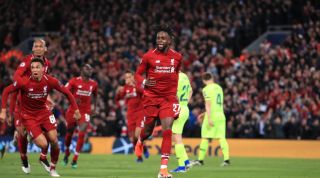 Liverpool lost 3-0 at the Camp Nou in the first leg of the duo’s last-four clash, before completing a remarkable comeback at Anfield thanks to braces from Georginio Wijnaldum and Divock Origi.

Klopp’s side then went on to lift the trophy following a 2-0 victory over Tottenham in Madrid.

Klopp had previously participated in two other Champions League finals, losing to Bayern Munich as Borussia Dortmund boss in 2013, and also coming up short when Liverpool met Real Madrid in 2018.

The German guided the Reds to their highest ever top-flight points tally last season, and is aiming to add a Premier League winner’s medal to the two Bundesliga crowns he won with Dortmund.

But despite his array of achievements throughout a managerial career which began with Mainz in 2001, Klopp says masterminding Liverpool’s unlikely defeat of Barcelona was his biggest feat to date.

“My greatest triumph as a manager was born from a disaster,” he told the Players’ Tribune.

“Losing 3–0 at Barcelona in the Champions League last season was the worst result imaginable. When we were preparing for the second leg, my team talk was very straightforward. There was no Rocky this time. Mostly, I talked about tactics. But I also told them the truth.

“I said, ‘We have to play without two of the best strikers in the world [Mohamed Salah and Roberto Firmimo]. The world outside is saying ‘it’s not possible’. And let’s be honest, it’s probably impossible. But because it’s you? Because it’s you, we have a chance.

“I really believed that. It wasn’t about their technical ability as footballers. It was about who they were as human beings, and everything they had overcome in life. The only thing that I added was, ‘If we fail, then let’s fail in the most beautiful way.’

“Of course, it’s easy for me to say those words. I’m just the guy yelling from the touchline. It’s much harder for the players to actually do it. But because of those boys, and because of the 54,000 people at Anfield, we did the impossible.

“The beautiful thing about football is that you can’t do anything alone. Anything, believe me.”

Liverpool maintained their 100% winning start to the Premier League season with a 2-1 victory over Chelsea on Sunday.