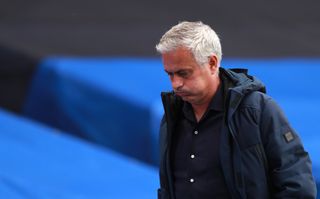 Jose Mourinho has “total confidence” that Tottenham will sign a striker during the current transfer window.

Mourinho is desperate to provide reinforcements to his attacking arsenal and give competition to Harry Kane, something they were without for the whole of last season.

Spurs have been linked with a number of players, both in England and Europe, and Mourinho is expecting the club to deliver before the window shuts in October.

However, there will be no movement before Sunday’s Premier League opener with Everton on Sunday.

“Are we going to get one? I believe so, I honestly believe so. The team needs it for the balance of the squad, with different options for different positions.

“Especially after the gift we had from the EFL and UEFA, that gives me after 20 years of football a unique experience of playing Sunday, Tuesday, Thursday, Sunday for two consecutive weeks. We realise that more than ever we need that.

“We are working on it. We are not the kind of club that can go to the market and spend a fortune on players but we are working hard to give us good balance to the squad and that good balance would be to get one more striker.

“The other day Jurgen (Klopp) was saying that Liverpool is not a club of oligarchs and that belongs to countries. We are the same. We cannot go to the market and spend a fortune on players.

“But we all – we all, I want to make that clear – are working hard to give good balance to the squad and that good balance would to get one more striker to the team.

“We are working. Different people in the club in different areas. We try all together to find a solution that makes us all happy. Of course I have total confidence that it’s going to end in a positive way for the squad, in the end we’re speaking in the end about our squad, our team, our club.

“It’s in the interest of every one of us is working in different areas to try to find a solution.”

Getting a striker to come and play second fiddle to Kane has always been presented as one of the constraints of signing a player, but that should not be a problem according to the manager.

The amount of games coming up over the next couple of months and Kane’s unfortunate tendency to pick up injuries means game time should be possible, plus Mourinho has floated the idea that any new arrival could play up front with the England captain.

“A squad is a squad, a striker can play with Harry Kane if he comes here it is not just to be feeling that he is a back-up.

#️⃣ 👕 Our Premier League squad numbers for the 2020/21 season have been confirmed!— Tottenham Hotspur (@SpursOfficial) September 11, 2020

One player who seems certain to leave Spurs is Danny Rose, who has been linked with a move to Genoa.

The left-back, who spent the second half of last season on loan at Newcastle, has not been given a squad number by Spurs and has been training with the club’s youth team during pre-season.

“It’s one of the things that was very clear you that you could learn from one of the Amazon bits is that Danny is the kind of guy who wants to play all the time.

“Some players are more adapted to belong to a squad with lots of quality where the competition is higher. Other players are only happy if they’re in a club where they play all the time.

“It’s very difficult for him to stay here with us when for me it’s clear that Ben Davies is such a solid left-back, Ryan Sessegnon is an investment by the club, an emerging player that we want to improve.

“So it’s very difficult for Danny to stay with us this season. If he goes to Serie A and Genoa I think it’ll be very good for him.