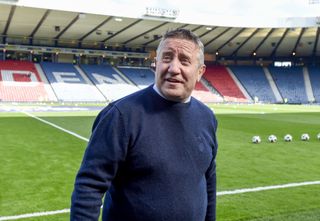 Inverness boss John Robertson claimed referee Steven McLean had “guessed” and got it wrong after awarding Hearts their winning penalty at Tynecastle.

Jamie Walker scored the only goal of the Betfred Cup encounter from the spot after Cameron Harper had been penalised for handball.

Josh Ginnelly’s strike hit the full-back on the elbow, which was right in front of the player’s chest.

Robertson told Premier Sports: “He has turned his back, his arms are in his body line, he has not raised them.

“Has it hit his hand? Yes, but it’s not in a position we were told it would be a penalty so we are disappointed in that. We think he (the referee) has guessed.

“If his arms are up or outwith his body we will accept it’s a penalty all day long. They’re not.

“It’s been hammered at him from 10 yards and his arms are inside his body line and it’s hit his arm.

“Under the new regulations – and we were all on the Zoom call – that’s not a penalty. It wasn’t even close to being a penalty kick.”

Hearts manager Robbie Neilson disagreed with his opposite number’s assessment and claimed there was a bigger shout for a penalty when the ball hit Brad McKay’s hand, although the defender had fallen to the ground and his arm was underneath.

On the award, Neilson said: “It hits his hand, it’s a penalty. We can talk all day about it. I think the one in the first half was more of a penalty to be honest, that was a blatant one, he dived on it.

“The second half, the ball is going on target, the hand gets in the way, it’s a penalty.”

Neilson was happy with his side’s display in his first game of his second spell as manager.

“First half we played well and created a lot of chances, if we managed to get one in it changes the game,” he said. “Second half we fatigued a bit.”

Robertson was also satisfied with his team despite their loss.

“In terms of the game our young lads were magnificent. They worked really hard and we had as many good chances as Hearts,” he said.

“Both keepers made some fantastic saves and it’s taken a controversial decision to split the teams.”