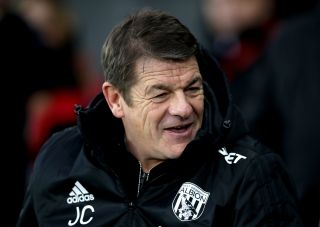 Carver comes in following the departure of Alex Dyer, who has stepped down to focus on his club duties after being appointed Kilmarnock manager.

The Newcastle-born coach had several spells in caretaker charge of the Magpies and was assistant to both Sir Bobby Robson and Alan Pardew.

His longest spell in charge was for the second half of the 2014/15 season when he oversaw a run of eight consecutive defeats, but he guided United to Premier League safety on the final day of the campaign.

The 55-year-old also had stints in charge of Toronto and Omonia Nicosia, as well as coaching duties with Leeds, Luton, Plymouth and Sheffield United.

He joins up with Scotland ahead of the Nations League double-header against Israel and the Czech Republic.

Steven Reid, another of Clarke’s assistants, said: “John has come in. His relationship with the manager goes back a long time.

“I have met him on a few occasions when I was coaching alongside Steve at Reading. They have a great relationship.

“It is a shame to lose Alex, I’ve got a really good relationship with him but I understand the reasons for it, his priorities now are with Kilmarnock.

“It is great to have John in. He has got a great coaching CV. He has worked at all levels of the game and is another experienced coach I can learn from.

“He has a good personality that will challenge things as well. If he sees something he is not one to sit back and let it slide, he will be getting involved in that and it is great to have him on board.”

Meanwhile, Reid revealed that Sheffield United striker Oli McBurnie dropped out of the squad due to “an issue with his foot” and there were no plans “at the moment” to bring anyone else in.

McBurnie and fellow forward Lawrence Shankland withdrew at the weekend and Cardiff utility-man Callum Paterson was called up.