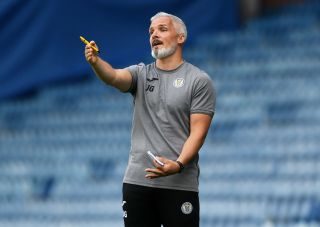 St Mirren manager Jim Goodwin defended Joe Shaughnessy after the Irishman was sent off in his side’s 1-1 draw with Ross County.

Goodwin felt the defender had made a “good, hard tackle” on County striker Ross Stewart after fourth official Willie Collum appeared to advise referee Mike Roncone – making his Premiership debut – to overturn his original decision to play on.

Goodwin said: “I haven’t had a chance to watch it back yet, but my initial reaction was that it was a good, hard tackle.

“It was a full-blooded challenge from Joe, who isn’t a dirty or malicious player and certainly not one who’d be going in there to hurt an opponent.

“The referee seemed quite happy with the tackle because he waved play on, but the reaction of the Ross County player makes you fear the worst. I thought he’d had a real bad one and that he’d maybe broken his leg.

“I was fully expecting the stretcher to come out, but he was able to get back up and play for the half an hour or so that was left with no limp.

“That would suggest that the contact from Joe wasn’t that bad and that it didn’t merit that reaction. It was certainly the fourth official who made the call that it was a red card.”

County manager Stuart Kettlewell, however, felt that Stewart had come close to suffering a broken leg.

“It’s a red card in my opinion,” he said. “I have seen it back and I think my player is very lucky to still be playing at the end.

“By millimetres he has dodged a real serious injury. Shaughnessy has a straight leg and he is very close to catching Ross around the knee joint. He is out of control, so it should be a sending off.

“I have to say the referee missed it and went to play on, but the fourth official has seen it. I think they have got it right.”

Goodwin admitted to having “mixed emotions” at having to settle for a point after leading for so long in the game.

“I’m disappointed that we couldn’t hang on and take all three points: that would have taken us to third in the table and that was our incentive,” he added.