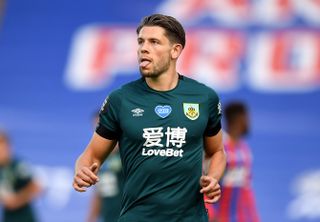 West Ham target James Tarkowski played for Burnley in their 4-1 win over Hearts in a pre-season friendly on Saturday.

The centre-back had missed the Clarets’ midweek clash with Preston due to a “minor knock” but was back for Sean Dyche’s side.

Burnley played two matches at their Barnfield training ground with first-team members split up and Tarkowski faced Hearts alongside Ashley Westwood and James Rodriguez while the likes of Dwight McNeil and Chris Wood were up against Mansfield.

He was involved despite attracting interest from Premier League rivals West Ham, who are eager to readdress the balance of their squad.

Tarkowski, who has played twice for England, is a target for the Hammers, but reports of a £20million bid are wide of the mark, the PA news agency understands.

West Ham are prepared to spend more than that on the centre-back, who has two years left to run on his deal after he agreed a contract extension in January 2018.

It was a move which did not go down positively with fans or skipper Mark Noble, who said on Twitter: “As captain of this football club I’m gutted, angry and sad that Grady has left, great kid with a great future!!!!!”

As captain of this football club I’m gutted, angry and sad that Grady has left, great kid with a great future!!!!! https://t.co/oNPPEp8Pt6— MARK NOBLE (@Noble16Mark) September 4, 2020

Fellow midfielder Jack Wilshere also hinted at his unhappiness following the decision to allow the academy graduate to depart the London Stadium.

He said in a comment on Diangana’s Instagram page: “Go and do your thing in a club that respects you. Big player with a big future.”

It did not stop Noble and Wilshere being included by Moyes in the West Ham squad to play Bournemouth on Saturday.

The Hammers captain was part of the starting XI for the friendly while ex-Arsenal midfielder Wilshere had to contend with a place on the bench.

Chances at his boyhood club have been harder to come by, though, and in the statement to confirm his departure, West Ham admitted the decision to sell had been made “reluctantly” due to competition in his position.

Moyes has Felipe Anderson, Michail Antonio, Pablo Fornals, Robert Snodgrass and Andriy Yarmolenko as options in wide areas and the Scottish manager will hope Diangana’s transfer can help bring in a new defender.