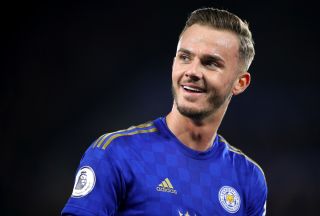 James Maddison has ended speculation about his future by signing a new four-year deal at Leicester.

The 23-year-old England international, who joined from Norwich two years ago and had been heavily linked with Manchester United, will now remain at the King Power Stadium until at least 2024.

“It’s an incredibly exciting time to be a Leicester City player with so many positive things happening on and off the pitch and I’m delighted to be part of that.”

Leicester finished fifth in the Premier League under Brendan Rodgers last season to qualify for the 2020/21 Europa League.

Maddison said: “What we’ve achieved as a club this season is a huge step forward for us and I know there’s so much more to come from this team.

“The supporters have been incredible to me and we have a fantastic set of players in that dressing room who are determined to show what we’re capable of doing together in both Europe and the Premier League next season.”

Coventry-born midfielder Maddison began his career with the Sky Blues as an academy graduate before moving to Norwich in January 2016.

He joined Leicester in a reported £22million deal in June 2018 and has since scored 16 goals in 76 appearances for the Foxes.

Maddison made his England debut in a 7-0 victory against Montenegro in a Euro 2020 qualifier last November.

Leicester had earlier announced that midfielder Nampalys Mendy had signed a two-year contract extension to take him through to the end of the 2021/22 season.

The 28-year-old Frenchman had signed a short-term agreement to allow him to complete last season’s coronavirus-hit campaign.

Rodgers told LCFC.com: “I’ve enjoyed working with Papy since I arrived at Leicester City and the more I’ve seen of him, the more impressed I’ve been, so I’m delighted he’s extended his deal with the club as he has an important role to play.

“To have someone with his experience, quality and maturity is a big boost for us, especially with European football next season.

“He’s been first class for me and has played very well every time he’s featured, so I’m delighted that he’s committed to continuing to be part of what we’re trying to build at Leicester City.”

Mendy began his career at Monaco and joined the Foxes from Nice in 2016, spending a season back on loan at his former club in 2017/18.

He has made 49 appearances for Leicester, with 42 of them coming in the Premier League.