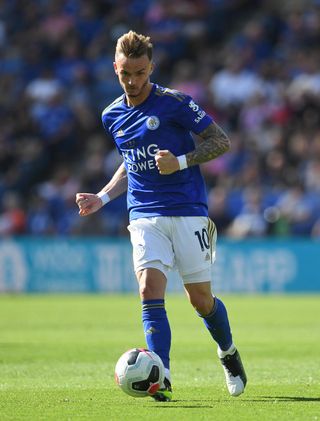 James Maddison insists Leicester have sent out a message to the Premier League’s elite after their controversial win over Tottenham.

The midfielder struck a late winner to seal a 2-1 victory for the Foxes on Saturday.

It came after Serge Aurier looked to have put Spurs 2-0 ahead in the second half only for VAR to disallow the goal with Son Heung-min fractionally offside.

Enjoyed that one🤩 Have a great weekend you Foxes💙🦊 pic.twitter.com/cz3OdAhCum— James Maddison (@Madders10) September 21, 2019

Leicester sit third in the Premier League after Saturday’s results and Maddison believes they have proved their pedigree.

“We are a top side now – I think we have to be seen as one of those top sides,” he told BT. “Nobody will want to come to this place when it’s rocking like this.

“If you look at our performances at Chelsea and United, we came away shaking our heads in disappointment because we didn’t get what we deserved. We’re showing we’re a big threat now.

“You get that little lift (when the opposition have a goal disallowed by VAR). I’ve had some chances this season, and I need to score more goals if I want to take my game to the next level.”

Maddison impressed in front of watching England boss Gareth Southgate but took a knock to the ankle in the second half.

“I’m a little bit worried about the ankle, but I’ll go and see how it is now,” he added.

Son was ruled to be millimetres offside in the build-up with VAR taking two minutes to make a decision.

Harry Kane’s brilliant improvised finish – as he hooked past Kasper Schmeichel while falling to the ground – had given Spurs a first-half lead.

Wilfred Ndidi had already seen a goal rightly ruled out by VAR for offside after he bundled in when Paulo Gazzaniga spilled Youri Tielemans’ drive.

But Maddison’s strike means Mauricio Pochettino’s side are still looking for a first Premier League away win since January.

The boss added: “I’m not going to talk. I’m only going to say that we all accept that system in the game and now I am not going to complain.

“I am going to accept that maybe if you are going to say it’s offside or wasn’t if it wasn’t clear, but I trust in the referees and if the referees say it was or wasn’t I’m not going to complain.

“I think we need to analyse the game in a different way and not include the VAR.”