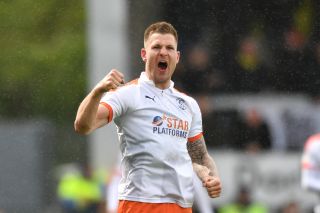 A 16-minute hat-trick from striker James Collins saw Luton reach the second round of the Carabao Cup with a 3-1 win over Norwich at Kenilworth Road.

The hosts had threatened early on, Luke Berry’s corner met by Sonny Bradley at the far post and Elliot Lee volleying narrowly wide of the target.

Norwich, whose squad was ravaged by international call-ups, injuries and suspension, took 20 minutes to really look like testing James Shea in the home goal as German midfielder Lukas Rupp’s 20-yarder whistled into the side-netting.

City’s summer addition from Sunderland, Bali Mumba, also went close for the visitors just before the half hour, his attempt tipped over by Shea, only for referee John Busby to award a goal kick.

Shea came to Town’s rescue on 35 minutes, when he managed to block another rasping effort from Rupp with his legs, then managing to collect the rebound before Jordan Hugill could pounce.

Kieran Dowell sent a free-kick into the wall while, on the stroke of half-time, Town should have been in front, Cranie unlocking the away defence but Collins got his angles all wrong, his attempt dribbling tamely behind.

In the second period, Lee just could not quite meet Cranie’s right-wing cross, before City started to crank up the pressure in the early stages.

Skipper Alex Tettey’s half-volley from 20 yards drew an excellent stop from Shea, the keeper turning behind, before he also denied Dowell, showing impressive reflexes to get down and prevent his angled drive finding the net.

Hugill’s cross-shot was straight at the Town stopper, while the summer signing from Middlesbrough just could not reach Mumba’s low cross at full stretch.

Josh Martin was next to threaten for Daniel Farke’s side, as he twisted and turned to set up a shooting opportunity that saw Shea cling on low down.

The game then came to life with 79 minutes gone, as Pelly-Ruddock Mpanzu was fouled in the area by sub Mario Vrancic for a penalty that Collins slotted down the middle.

City hit back just two minutes later, when Dowell’s snapshot from the edge of the area nestled into the bottom corner, but Town were back in front themselves within 60 seconds as Collins’ volley beat Barden via a slight deflection.

Glen Rea almost had a third, blasting off target, before Collins wrapped up the win and his treble, converting from close range after Jordan Clark’s unselfish assist.