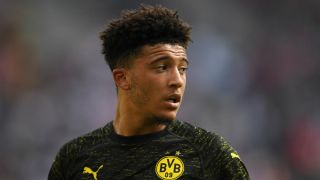 Manchester United’s pursuit of Jadon Sancho has hit a stumbling block over the player’s personal terms, according to reports.

ESPN claims that United are still keen to sign the Borussia Dortmund winger this summer as they look to bolster their attack ahead of the 2020/21 campaign.

However, the club have so far been unable to agree a deal with Sancho, while they are also struggling to make a breakthrough in negotiations over a fee for his agent.

Dortmund had previously insisted that Sancho would not be sold if the player remained on the books when they began pre-season on August 10.

However, the Bundesliga club have allowed United to speak to Sancho and his representative as Ole Gunner Solskjaer’s side hope to complete a deal.

The discussions are yet to bear fruit, though, with the two parties still some way apart with regards to Sancho’s wage demands.

United are confident of agreeing a fee with Dortmund but the proposed transfer could fall apart unless progress is made with the player and his agent.

Sancho is Solskjaer’s primary transfer target this summer, with the United boss aware of the need to add strength in depth to his squad ahead of the new season.

However, the club are keen to avoid overpaying on transfer fees and wages, particularly given the financial hit they have taken during the coronavirus pandemic.

Sancho has been linked with several European sides in recent months, including Chelsea, Real Madrid and Manchester City, the club he joined Dortmund from in 2017.

However, United are his only active suitor at present and another season at Signal Iduna Park is likely unless the winger is able to reach an agreement with the Red Devils.

United will begin the 2020/21 season against Burnley, although they will kick-off later than other clubs due to their run to the Europa League semi-finals.