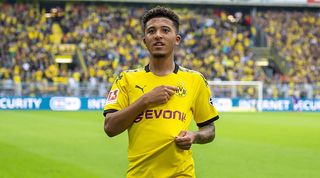 The former Manchester City man was handed a pay rise in August following his sensational breakout season in 2018/19, when he scored 12 goals and assisted 14 more as Dortmund challenged for the Bundesliga title.

However, the England international did not sign an extension - his new deal expires in 2022, just as his previous one did - and ESPN report that United will attempt to prise him away from Signal Iduna Park next summer.

Ole Gunnar Solskjaer's side acquired Harry Maguire, Aaron Wan-Bissaka and Daniel James ahead of this season, and the United boss wants to maintain his policy of targeting British players in the transfer market.

Leicester midfielder James Maddison is another leading target for the Red Devils, with the Foxes likely to value the 22-year-old at around £80m.

United are also keeping a close eye on Bournemouth striker Callum Wilson, who was linked with a move to Chelsea last term.

Newcastle midfielder Sean Longstaff and Stoke defender Nathan Collins are among the other names on Solskjaer's shortlist.

Andy Mitten column: In praise of Scott McTominay – beloved by Mourinho, but blooming under Solskjaer