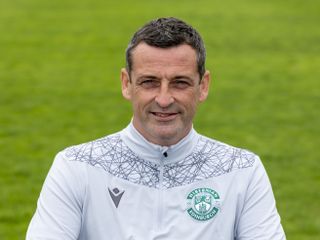 Hibernian head coach Jack Ross has promised they will get better in the final third after losing their unbeaten start to the Scottish Premiership season.

The hosts created a number of chances in an entertaining first half but could not test Dons goalkeeper Joe Lewis after the opener.

It was the second consecutive game at Easter Road that Hibs had drawn a blank – they were held to a goalless draw by Motherwell last time out and needed a stoppage-time penalty to open the scoring at St Johnstone in between.

Ross said: “First half we got ourselves into a lot of good positions and probably played as well as we have done in recent weeks. We didn’t make the most of those opportunities.

“Second half we weren’t as creative and that was despite having all of the attacking players we had available on the pitch.

“Individually some are maybe not quite bang at it, but we will use this couple of weeks to get them there and when they do, and they will do, we will be better for it.”

Hibs were again without striker Kevin Nisbet, who has had a hamstring problem, and former Preston winger Daryl Horgan is set to return to England after attracting interest.

Winger Drey Wright came back into the team after overcoming an injury while Jamie Murphy came off the bench 24 hours after joining from Rangers – having been unable to train following the false positive coronavirus test that ruled Alex Gogic out of the game.

Ross, who also brought striker Jamie Gullan off the bench, is not about to sign any new strikers and will focus on working with the attacking threats he already has.

“There is nothing imminent,” he said. “Kevin will be back for the St MIrren game and that will help us.

“It’s likely that Horgan will leave in the coming days, it’s been in the pipeline for a couple of weeks so we needed to have enough cover for that.

“Jamie coming in gives us that extra wide player again, so it’s not padding out the squad, it’s really just replacement and giving us another option.

“He hadn’t even met the group because obviously we didn’t train on Saturday, so he’s still catching up fitness-wise, but it was nice to get him on the pitch and he will be an asset for us going forward.”