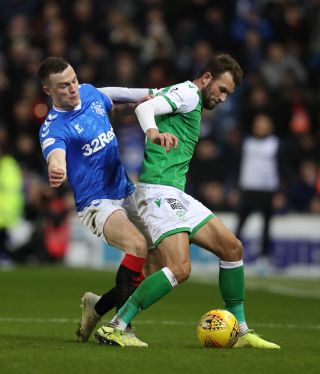 Hibernian head coach Jack Ross has backed Christian Doidge to bounce back from his international disappointment and prove he is good enough to play for Wales.

Doidge was hopeful of winning a first call-up for Ryan Giggs’ squad for Nations League games against Finland and Bulgaria but the striker missed out again.

The former Dagenham and Redbridge and Forest Green forward had a slow start to life in Scotland last season but his first league goal in October opened the floodgates and he hit 16 goals in his final 23 matches of the truncated campaign.

The 28-year-old has started this season where he left off, netting twice to help Hibs to 13 points from their opening five Scottish Premiership games.

Hibs have not been slow to push his international credentials, but the Newport-born forward missed out as Giggs selected West Brom’s Hal Robson-Kanu, Tyler Roberts of Leeds, Schalke’s Rabbi Matondo and Kieffer Moore of Cardiff as his four forwards.

Ross tried to lift Doidge’s spirits in the aftermath of the blow but is confident his player will remain determined to battle his way into the international reckoning after fighting back from major blows throughout his career.

Doidge has represented Wales at youth level but in basketball, after giving up football when he was released by Bristol Rovers at the age of 15.

He returned to the game in the Welsh league with clubs including Barry Town and Carmarthen but was rejected following a trial with Newport before making his way into the English Football League.

Ross said: “I spoke to Christian in the aftermath of him not making the squad. His first emotion was one of disappointment because he has been in consistently good form for a while now.

“But it was a case of reminding him, very obviously, if he continues to do what he’s doing, and he has done, then he will keep giving himself every opportunity.

“And also Christian’s career path, he has had to deal with a lot of rejections, knockbacks, setbacks along the way. He has continually had to prove people wrong, if you look at his background.

“And he should continue to have that motivation. He will have no problems that way.

“He was a little bit sore because he was working towards it but all he has got to do is continue to do what he’s doing and get better – continue getting better. And if he does that, I’m sure that will come for him at some point.”

While Doidge missed out for Wales, defensive midfielder Alex Gogic won a first call-up for Cyprus five games into his Hibs career following his summer move from Hamilton.

Ross, whose team host Aberdeen on Sunday, said: “I’ll say I’ve not been surprised because it’s the reason I brought him to the club and the role he has done within the team has been exactly what we wanted. But to produce that level of consistency early on at a new club has been the most pleasing thing and how quickly he has settled in the group.

“I can’t ask any more in that respect, he has made a vital contribution in terms of us achieving the results we have done.

“I think part of the attraction of coming here was to hopefully propel him into that international reckoning again. It maybe came sooner than he expected but I’m delighted for him. It’s a real big honour for him and I think he’s excited about it as well.”