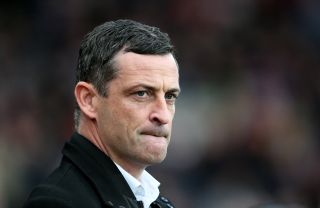 Hibernian head coach Jack Ross has called for more support for Scottish football throughout the varying levels amid fears for clubs’ futures without gate money.

The return of fans to grounds was delayed by at least another three weeks and there are real concerns that their absence could be even longer term following six months away already.

Ross believes the lower leagues and non-league outfits are in real danger and a way should be found with the Scottish Government to get some fans back watching games or the consequences for communities could be dire.

Ross said: “There’s been a lot of talk about how it impacts upon the top level because we are missing the atmosphere but for me the bigger picture is how it’s impacting on all the clubs through the levels.

“I have had playing experience at junior football when I was young, I’ve had coaching and managerial experience at Dumbarton and Alloa that have helped me get where I am.

“It’s so vital these clubs are allowed to continue to thrive and exist because they play such an important part in people’s day-to-day life.

“If we can edge towards that, and if it is at the lower levels to begin with then great, some of us are robust enough higher up the food chain to survive a little bit longer.

“It would be important if we dealt with that further down and we allowed that to start the process.”

Ross feels the football community could boost his cause like other industries.

“The lobbying aspect of it is going to be important,” the former Sunderland boss said. “There’s a lot of other industries that lobby to make sure they can continue to operate to survive.

“We as an industry – and I mean right down through the levels of the game and the pyramid – play such a significant part in Scottish culture that it’s vital they get support.

“I’m not saying it’s easy to find that support but it’s something that is imperative we try and do because we would look back and regret if we allowed some clubs to drift away and communities to be without a football club as a focal point.

“I’ve seen first hand the work these clubs do in the communities and I have also seen first hand people (for whom) going to a football match every weekend is such a huge part of their lives, standing and having social contact and interaction.

“We have to remember that, people will point to it just being a game but it’s much more than that.”

The Scottish football authorities are seeking information from clubs on the consequences they face from an ongoing supporter ban while the Highland League have reported an increased risk their season will not start as planned on October 17.

1. @ScottishFA, @scotgov, @FionaHyslop, @MartynDaySNPLast week we played East Stirling at Prestonfield. Nobody was allowed into the ground to stand 2 metres apart. 10 metres from the turnstiles, folk were sitting in the club beer garden with their mates in a 1 metre apart zone.— Linlithgow Rose F.C. (@LinlithgowRose) September 25, 2020

Linlithgow Rose, from the East of Scotland Football League Premier Division, the sixth tier of the game, outlined some of the contradictions Ross was talking about in a series of tweets directed at the government and local politicians.

“Last week we played East Stirling at Prestonfield,” they said. “Nobody was allowed into the ground to stand 2 metres apart. 10 metres from the turnstiles, folk were sitting in the club beer garden with their mates in a 1 metre apart zone.

“Nothing about the ventilation or risk of catching Covid changes over that 10 metres. It’s our view that all these people would have been at no extra risk inside the ground than outside it, in the social club or other venue.

“A level of protection is being afforded to one business area whilst the other is threatened with devastation.”

The appeal ended: “Let us manage our supporters or give us the support needed to run our business behind closed doors.”