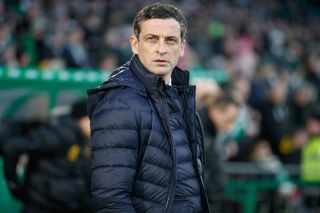 Callum Hendry’s first-half header for Saints was ruled offside but television pictures showed it should have stood.

Callum Davidson’s men had the better of the second period but in the dying seconds of normal time referee John Beaton awarded Hibs a penalty for a foul by Saints defender Liam Gordon on Ryan Porteous.

Mallan, on as a second-half substitute to make his first appearance of the season following a knee injury, thrashed in the spot-kick to take Hibs, unbeaten in five games, level on points with leaders Rangers.

Former Sunderland and St Mirren boss Ross said: “I have been in the game a long time and usually my gut reaction is the one I trust.

“I thought at the time, I was disappointed at how soft the goal was from our point of view, if it was a goal. It looked onside.

“You see the flag go up and you doubt yourself but I watched it at half-time and it looked onside. So that is obviously a break that went our way.”

Ross, however, was also clear that the penalty was the correct decision.

He said: “I thought it was. By the time Ryan falls there is a lot of bodies round him which I can understand there being a bit of dubiety.

“I thought there was contact from Liam Gordon, two hands on the back quite early as the ball is in the air which maybe people don’t look at but from that point of view it was a penalty but I can understand people arguing for and against it.”

Ross, who revealed top-scorer Kevin Nisbet missed the game with a slight hamstring injury, was glad to see Mallan make such a dramatic comeback.

He said: “I said to him to go on and win the game for us. I didn’t imagine it would be in that manner.

“I feel he has got quality and this is the first week when he has been really fit.

“He’s had a problem with his knee for a while now. Even when he came back in pre-season it wasn’t quite right.

“We have worked hard at fixing that for him and I think this week of training is the best he’s felt.”

St Johnstone boss Davidson was quite pragmatic with the offside decision that ruled out a goal for Hendry, saying: “I’m not standing in line so it’s always difficult to see. You accept the referee’s decision.”

But Davidson was less accepting of the penalty award.

He said: “Let’s just say there were a lot of hands up in the box. What I will say is he gives the referee an opportunity by raising his hands. I can’t say anymore.

“There are another couple of hands there to create momentum for certain players. It’s hard to take, especially after the decision in the first half.”