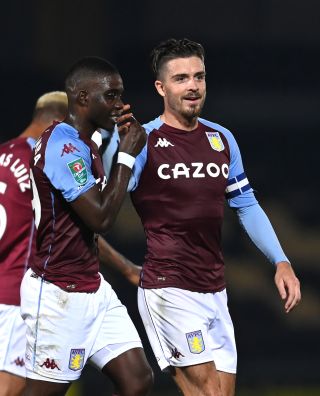 Jack Grealish celebrated his new contract at Aston Villa by scoring late on against Burton to help send his team through to the third round of the Carabao Cup.

The tie looked to be heading for a penalty shoot-out after club record signing Ollie Watkins had scored Villa’s equaliser late in the first half to cancel out Colin Daniel’s opener for the League One side after only 68 seconds.

But Grealish, who earlier on Tuesday had signed a new five-year deal with his boyhood club, struck a sweet volley from the edge of the area to edge Dean Smith’s team in front after 88 minutes.

Keinan Davis made sure of the victory in injury time as the 3-1 win saw Villa set up a trip to Bristol City or Northampton in the next round.

Grealish was named captain of a strong Villa side at the Pirelli Stadium which included six players who played for the club in last season’s final.

So it was a surprise when the League One side took a shock lead with little more than a minute played.

Ryan Edwards did well down the right side of the area and flashed a low ball across the face of goal for Daniel, arriving at the far post, to steer into the roof of the net.

Jacob Ramsey was inches away from El Ghazi’s cross as he slid in, Grealish saw a shot deflected wide and Hause headed over the crossbar before the half-hour mark.

As half-time approached, El Ghazi volleyed wide from the edge of the area. The pressure was building on Burton and six minutes before the break Villa drew level.

A lovely piece of play by Grealish out on the left set Neil Taylor free inside the area and his low cross was tapped home at the far post by Watkins for his first goal for the club.

Burton almost went straight up the other end and restored their lead after some sloppy play from Nakamba, who lost possession cheaply, allowing Edwards to curl a shot narrowly wide, with Orjan Nyland scrambling across his goal.

Some more wing wizardry from Grealish should have seen Villa head into the break in front. The England international slalomed his way into the area and along the byline before teeing up Watkins, who scooped his shot over, via the top of the crossbar, from just six yards out.

Another mistake, this time by Mings, saw Kane Hemmings nip in and shoot just wide at the start of the second half.

Much of the second half saw Burton working tirelessly off the ball as Villa’s superior quality in possession began to tell.

However, the League One side showed dogged determination and good levels of concentration and organisation to largely keep their more illustrious opponents at arm’s length.

Grealish had a couple of attempts blocked and home defender John Brayford poked a Elmohamady cross just past a post, narrowly avoiding an own goal.

Jota went close with a 25-yard strike before Grealish eventually made Villa’s pressure tell, meeting a corner from the left with a volley which flew low into the net.

Davis then latched on to Henri Lansbury’s through-ball to seal victory in injury time with a low finish across Sharman-Lowe and into the bottom corner.