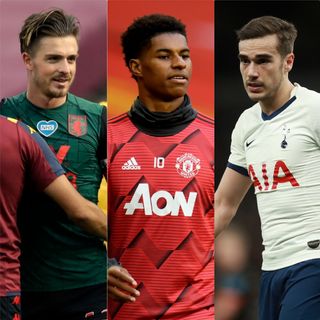 Jack Grealish has received his first England call-up for the Nations League matches against Iceland and Denmark but Marcus Rashford and Harry Winks have withdrawn from the squad.

Aston Villa captain Grealish has previously represented England at Under-21 level and was a member of Gareth Southgate’s Toulon Tournament-winning squad of 2016, but has never previously been involved with the senior side.

Southgate was criticised in some quarters for his initial decision to leave the 24-year-old midfielder out of his group.

But a change of heart has seen Grealish given his first chance to prove himself on the international stage, following an impressive campaign in which he played a pivotal role in Villa’s Premier League survival.

Grealish opted to represent England in 2015, having also had the choice to play for the Republic of Ireland, who he had previously represented at youth level.

He wrote on Twitter: “A dream come true to receive my first senior call up for @England”.

Manchester United striker Rashford has withdrawn from Southgate’s squad with an ankle injury, while Tottenham midfielder Winks has also been forced to return to his club, the Football Association confirmed in a squad update issued on Monday afternoon.

Rashford took to social media shortly after the announcement to express his disappointment.

He posted: “Gutted. Never want to let this team down but these fixtures just came a little too soon for me. I tried my best but I have to focus on starting the season at my strongest for club and country. Good luck boys, I’ll be cheering you on from home @england”.

Gutted 😔 never want to let this team down but these fixtures just came a little too soon for me. I tried my best but I have to focus on starting the season at my strongest for club and country. Good luck boys, I’ll be cheering you on from home 🦁♥️ @Englandpic.twitter.com/2OMHKPFLpm— Marcus Rashford (@MarcusRashford) August 31, 2020

Meanwhile, UEFA has set out what would happen in the event of Nations League matches being affected by the coronavirus pandemic.

UEFA’s executive committee ruled that a match could go ahead in the event of players being placed into quarantine or self-isolation provided a national squad still had a minimum of 13 players left to call on, including at least one goalkeeper.

If a country has less than that number of players available, efforts should be made to reschedule the match in the first instance. If it cannot, UEFA’s control, ethics and disciplinary body (CEDB) will determine where responsibility for the cancelled fixture lies.

If one country is deemed responsible, it will forfeit the match. If neither or both are determined to be responsible, lots will be drawn to decide whether the match should be awarded as a 1-0 home win, a goalless draw or a 1-0 away win.