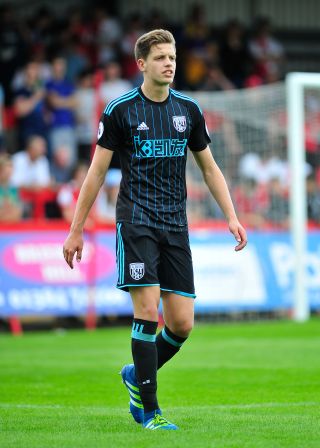 Jack Fitzwater was more than happy to trade a Premier League promotion party for the chance to play a more central role with Livingston.

The 22-year-old left West Brom early in July to join the Scottish Premiership club and is set to make his debut in their opening fixture against St Mirren.

The defender made his Baggies debut in an FA Cup win over Charlton in January and was in and around the squad without featuring in their successful Sky Bet Championship campaign.

He had decided to move on before the lockdown and grasped the chance before his Hawthorns colleagues went on to clinch promotion last week.

“I was watching the game last Wednesday on TV and I was buzzing because a lot of hard work has gone into it, not just this season but last season, and I have been a part of that,” he said. “I was happy for them to get over the line and back where they belong.

“I was at West Brom since I was seven. I kind of knew at Christmas time where I wanted to be and I wanted to play men’s football. I spoke to Slaven Bilic and the technical director at West Brom and they said they would love me to stay but I wasn’t guaranteed games.

“Once the Livingston deal came about I asked West Brom if I could stop training and come up and have a meeting, and once I was up it was done within a week. I can’t wait to get going.

“It’s been a long lay-off for all the lads. The last three pre-season games we played haven’t really had that pre-season feel and that’s credit to everyone, all the teams have applied themselves correctly. We can’t wait to get started.

“I want to play as many games as possible, win as many as I can for the club, and just do my best, and get back playing men’s football, because it has probably been 18 months where I have been training every day at West Brom and playing a few first-team games, but it’s not the same. You want to be playing week in, week out, and that’s what I have come here to do.”

He previously had temporary spells at Chesterfield, Hednesford and Forest Green.

“I have played in a Championship squad, League One, League Two, Conference, and this is the next step now, the Scottish Premiership,” he said.

“The standard is getting higher and higher every year and it’s attracting players to the league.

“You get to play the likes of Celtic and Rangers, which is a massive opportunity, and I know there are a lot of other great clubs as well which I can test myself against.”