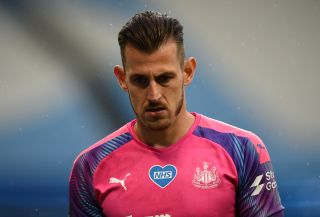 Newcastle goalkeeper Martin Dubravka will miss the start of the new Premier League season through injury, the club have announced.

The 31-year-old Slovakia international, who has played every league game for the club since his arrival on an initial loan spell from Sparta Prague at the end of January 2018, is expected to be sidelined for several weeks by a heel problem.

As a result, he will also sit out his country’s Nations League fixtures against the Czech Republic and Israel next month.

A statement on the Magpies’ official website said: “Newcastle United goalkeeper Martin Dubravka will miss the start of the 2020/21 Premier League season after suffering a heel injury.

“The 31-year-old is likely to be sidelined for several weeks, meaning he will also miss Slovakia’s UEFA Nations League fixtures against Czech Republic and Israel next month.

“Dubravka has not missed a Premier League game since making his debut in a 1-0 win against Manchester United in February 2018 and won the club’s Player of the Season award for 2019/20.”

The news will come as a huge blow to head coach Steve Bruce who, like predecessor Rafael Benitez, has come to rely upon the dependable Dubravka.

He will now have to turn to Karl Darlow, who has served as Dubravka’s deputy in recent times, or summer signing Mark Gillespie with England Under-21 keeper Freddie Woodman having joined Swansea on loan for the season after signing a new contract at St James’ Park.