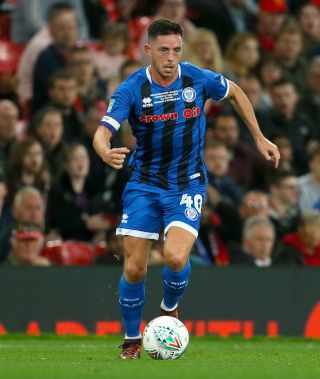 Heavy investment has seen the Ammies climb rapidly up the football pyramid with four promotions in six years and their famous ‘Class of 92’ owners have targeted another.

Henderson, who scored on his debut in Saturday’s Carabao Cup penalty shootout win against Rotherham, told the PA news agency: “Promotion is the aim. Without being flippant about it, I think that’s fair to say.

“We totally understand there’s going to be a huge amount of pressure on us to attain that.

“But that’s our responsibility this season as players and coaching staff and it has to be a target.”

Salford finished 10th, eight points adrift of the play-offs, last season – their first in the English Football League – and former Rochdale forward Henderson is one of six new signings.

He had established himself as a firm fans’ favourite at Spotland, scoring 126 goals in seven and a half years with the club, which places him second on Rochdale’s all-time list.

“Speaking to the manager (Graham Alexander) and Gary Neville, seeing the whites of their eyes and hearing what they want to create at the club and I was like ‘wow! I want to be a part of that’,” Henderson said.

“We spoke at length. Gary had a giggle and told me I had a good poker face. I just wanted to hear what their intentions were, what they wanted to achieve.

“I wanted to hear it and see the bigger picture and as soon as I did I got that feeling.

“Then I saw the backing and I was like ‘wow! This is going to be something special’.”

Rochdale said they were unable to renew the contracts of Henderson and four other senior players due to the financial uncertainty caused by coronavirus.

“Coronavirus has hurt a lot of football clubs, a lot of businesses,” said Henderson, who was speaking at the EFL Season Launch. “It’s not been nice to see it all to be honest.

“Friends’ businesses have been badly affected by this situation. My partner, Nicola, her mum, sister, brother-in-law, they’re all frontline NHS, so we’ve seen people working through a horrendous situation.

“With what’s going on in the world over the last 150 days or so, it’s shown me that life is so important.

“But football is an integral part of the community. It brings people together, sharing an objective or a goal, as a team and a fan.

“Lots of people worldwide live for football and if it isn’t there no-one’s going down the pub to talk about it.

“You don’t see the kids playing in the street screaming ‘Shearer scores again!’, little things like that have affected us all, but I’m so excited to be back.”