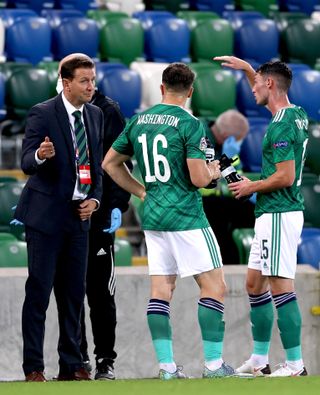 Ian Baraclough must pick through the rubble of Northern Ireland’s thrashing at the hands of Norway as they look to next month’s Euro 2020 qualifying play-off against Bosnia and Herzegovina.

As he assessed the damage from the 5-1 pounding at Windsor Park, Baraclough was forced to admit that Norway’s ruthless strike force, led by two goals each for young sensation Erling Haaland and Alexander Sorloth, was too good for a makeshift Northern Ireland defence missing both Jonny Evans and Jamal Lewis.

But though he could comfort himself that Northern Ireland will not face an attack as potent as Norway’s every time, he knows Edin Dzeko will be waiting for them when they head to Bosnia on October 8.

“It’s not the first home game I would have liked,” Baraclough said after Northern Ireland’s punishment was handed out amid the echoes of an empty Windsor Park.

⚽️ FT: A tough night for us ends in a 5-1 win for Norway #GAWApic.twitter.com/PkLzcp0URE— Northern Ireland (@NorthernIreland) September 7, 2020

“I would have liked the first home game to be full of fans with the atmosphere here that gets generated.

“It was a little bit eerie out there and not what the boys are used to and not what I’m used when I’ve been here so it was tough.

“We’ve come up against some strike force there, by the way. I think you’d have to pay £100million-plus to get hold of Haaland, Sorloth scored 33 goals in Turkey and is rated very highly, and they bring Josh King off the bench as well.

“The difference at the two ends is massive. Clinical, ruthless, pace, power…”

The Bosnia game now looms large as Baraclough looks ahead to next month’s triple header, with further Nations League games following against Austria and then Norway again.

“You’ve got to learn from everything and everyone involved, all the players, are disappointed,” Baraclough said.

“We had hopes of coming here, first game at home in the Nations League and building on what we did against Romania but we’ve got it wrong.

“We didn’t deal with the diagonal balls so we could have closed it a little quicker, we’ve not dealt with the first header.”

Baraclough will hope to have Evans back in Bosnia, but also believes his side will be a much different proposition once they have a month of the season under their belts.

Michael Smith was caught out for the opening goal but, aside from a late substitute appearance on Friday, the Hearts defender has not played a competitive game since March.

“If players are in different condition it gives them a much better chance of defending those better,” Baraclough said.

“Those are not goals that happen under normal circumstances. These are circumstances we’ve not had to deal with before – September fixtures when players are still returning to pre-season training.”

With Evans out, Arsenal’s Daniel Ballard started again after his impressive debut on Friday.

But the 20-year-old, recently back from a year out with a knee injury, was this time replaced at the break.

“Strength in depth is always going to be a problem,” Baraclough added. “If you lose the likes of Jonny and Craig (Cathcart), lots of teams would be hurt by that.

“We’ve asked Dan Ballard to step up. Tom Flanagan has for personal reasons stayed at home. We’ve asked Michael Smith to come in for his first game of the season, he’s not played since March.

“There’s a rustiness there that wasn’t going to help us. It didn’t help us in Romania and this time the finishing was just out of this world. You get it wrong by half a yard and it ends up in the back of the net.”