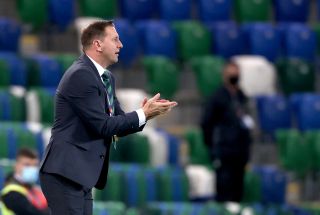 Northern Ireland manager Ian Baraclough admitted fatigue could have caught up with his players as they slumped to a 1-0 home defeat to Austria on Sunday night.

Three days after the dramatic Euro 2020 qualifying play-off penalty shoot-out victory over Bosnia and Herzegovina in Sarajevo, Northern Ireland suffered a sobering night at Windsor Park as Austria threatened to run away with the match in a dominant first-half performance.

Northern Ireland were relieved that Michael Gregoritsch’s 42nd minute header was the only chance they converted, with Christoph Baumgartner guilty of passing up two golden opportunities, but Baraclough admitted his side could not afford to start so sluggishly if they want results.

“We have to find a way of addressing that,” he said. “I felt the mentality going into the game was good. Everybody trained, everybody put themselves forward.

“They all want to be in the team to get themselves in the side to play Slovakia (in next month’s play-off final).

“I was confident coming into the game that we could get a complete performance.

“(It might be) a fatigue thing because physically and emotionally it’s tough to go again after 120 minutes and the penalty shootout and to win the way we did and travelling back, whereas Austria had a friendly, rested one or two and came in a lot fresher.

FT: @NorthernIreland 0 Austria 1. After the party, the hangover. Northern Ireland are well beaten by an Austria side who might have had more. Seven games, six defeats for Northern Ireland in the #NationsLeague now. #GAWA— Ian Parker (@iparkysport) October 11, 2020

“We don’t want to use that as an excuse because we’ve got to find a way of dealing with that because we want to go to the Euros and be playing every three or fours days. It’s a tough schedule at the Euros too.”

Northern Ireland improved after the break but still struggled to create chances. Jonny Evans glanced a header into the hands of Austria goalkeeper Pavao Pervan in the 68th minute, while shoot-out hero Liam Boyce could have stolen the headlines again had he converted a stoppage-time chance.

But it was otherwise a flat performance, with a Northern Ireland side featuring five changes from Thursday night unable to impose themselves in the way Baraclough would have hoped.

“I didn’t want to make wholesale changes because if you change eight or nine players you become disjointed,” Baraclough said. “I wanted to keep a core. They said they were ready to go so that’s good enough for me.

“You want to find a way to start the game aggressively because when we’re like that we’re difficult to play against.

“We knew Austria would come and be aggressive in their press and we didn’t deal with that as well as we can for whatever reason.”