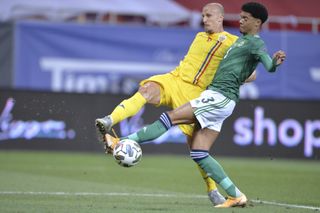 Ian Baraclough is certain that speculation over Jamal Lewis’ future will have no impact on the left-back ahead of Northern Ireland’s Nations League clash with Norway on Monday night.

Lewis played the full 90 minutes on Friday night as 10-man Northern Ireland fought back to take a point off Romania in a 1-1 draw in Bucharest.

Soon after the squad landed in Belfast in the early hours of the morning, reports came through that Norwich had accepted a £13.5million offer from Newcastle for the left-back, but Baraclough is sure Lewis will remain available and focused for Monday’s match.

It comes after Premier League champions Liverpool were linked with the 22-year-old earlier this summer before instead signing Konstantinos Tsimikas.

🎥 Manager Ian Baraclough was happy to shake off the 'rustiness' last night as he talks about that red card, the character of the squad and his immense pride 👇🏻 #GAWApic.twitter.com/yAf7y6UKmL— Northern Ireland (@NorthernIreland) September 5, 2020

Baraclough said: “I spoke to Jamal before we came in and again face to face, his head’s in a good place. He knows chances may come and go, club speculation, but he deals with that very well. I’ve not noticed any disappointment in his work or in his play, he’s OK.

“He won’t be leaving the camp, he’s been part of the group recovery today. I’ve heard nothing so I’m hoping he’s at dinner!”

Though a prospective move to Anfield would turn the heads of most players, Baraclough is sure Lewis knows time is on his side in his career.

“The Liverpool one is probably gone for now, but there’s no reason why it may not come back in a year or two’s time, there are a lot of clubs being linked with him,” he said.

“He knows that at the right time he and his family will make a decision of benefit to him. Because one club doesn’t happen for him, it doesn’t mean other clubs aren’t interested.”

With Lewis available, Baraclough should be able to restore his first-choice defence with Jonny Evans having also trained on Sunday after not travelling to Bucharest for personal reasons.

Arsenal’s Daniel Ballard made his debut in his place, and should be fit again after cramping up late on, though there are concerns over Jordan Jones and Matty Kennedy.

Since being named as Michael O’Neill’s successor in April, Baraclough waited a long time for his first match in charge on Friday night, only to see his plans unravelled as they went in a goal down and a man down at half-time.

“You draw on experience,” he said. “I remember my first game as manager of Sligo Rovers. We went to Shelbourne, we got a man sent off in the first half, we were 1-0 down going in at the interval and ended up drawing the game 1-1.

“One of my old Sligo players texted me after the game on Friday night and reminded me about that. It’s experience like that that you draw upon. You try not to panic, calm the players down, try and talk through one or two things, tweak one or two things and be patient with it.”

Norway, spearheaded by Joshua King and teenage sensation Erling Haaland, will now present a different challenge but one Baraclough expects his players to relish.

“Of course the legs are tired but as the day went on you think what an achievement it was on Friday night,” he said. “The lads only had two weeks pre-season, down to 10 men on 39 minutes and they could have thrown the towel in with so much time left in the game.

“They could have saved their legs, but that’s not the style, the way these guys have been made and brought up.

“There is a fire and hunger and if there is a chance of getting back in the game, they wouldn’t give it up. They showed it in abundance in Romania and I’m pleased it was in my first game.

“We can now look ahead to Monday and build on what we achieved in Bucharest.”