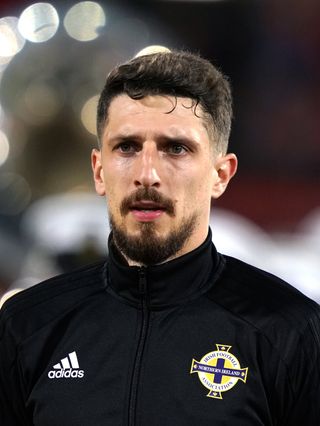 Northern Ireland begin life under Ian Baraclough with Nations League games against Romania and Norway this week but attention remains squarely on the postponed Euro 2020 qualifying play-off still to come against Bosnia and Herzegovina next month.

The Green and White Army will make a flying visit to Bucharest for Friday’s match, arriving on Thursday afternoon and leaving almost immediately after the match to minimise their travel amid the coronavirus pandemic, before hosting Norway at Windsor Park on Monday night.

The games will be the first in charge for former Under-21s boss Baraclough after Michael O’Neill’s eight-year reign was brought to a close in April, but continuity will be a theme as Northern Ireland look to maintain the success O’Neill enjoyed.

A change of manager is nothing new for Craig Cathcart after a season in which Watford got through four changes in the dugout en route to relegation from the Premier League.

“I think it’ll be quite easy for me because it has happened so much at club level,” the defender said.

“We’ve known Ian for a while, he’s been in a few squads with us and taken a few sessions before so we know he is a good coach and has good ideas.

“It’s not a major change and obviously he has the experience of working with the Under-21s and will know which lads are ready to push to the first team and hopefully make us better.”

Corry Evans expects the change of manager to bring a little bit of impetus to Northern Ireland, and sees no reason why Baraclough cannot build on O’Neill’s legacy.

“It’s always exciting when a new manager comes in, a bit of the unknown – but I’ve known Ian from the 21s, he was with the senior squad a few times,” the Blackburn man said.

“He’s been around, the lads know him, the younger boys in the squad know him from the 21s. It’s been good so far, everyone’s enjoying it…

“I’m sure ‘Bara’ knows that as he’s well, he’s going to rely on the older heads in the squad to keep that team DNA, if you like, to keep driving us forward.”

When Northern Ireland set out on their previous Nations League campaign two years ago, players and coaches alike admitted they were struggling to understand a competition in which they would go on to lose all four games, only spared relegation by a change of format this time around.

Evans admitted he is not much clearer on the rules this time around, but a key part of these games will be preparing for the match against Bosnia and Herzegovina.

“It’s always important to win games, but truth be told it still sort of baffles me how it actually works to be honest,” Evans said. “But we’ll obviously be told that, how it works, from the manager in the course of the week here.

“The manager will be looking at it as well to try to find a team he wants in his style, the personnel he might want to play in these games. It’s probably good preparation for going into that game next month.”