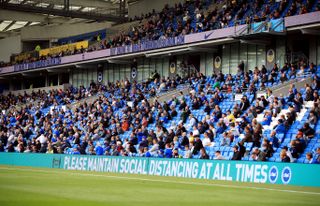 The Premier League 2020/2021 campaign will kick off on Saturday when newly-promoted Fulham host Arsenal.

Here, the PA news agency takes a look at what to expect from the new season as football aims to continue to play on through the coronavirus pandemic.

When will fans be allowed back in to grounds?

Not any time soon. It had been hoped there could be a planned wider return of sports spectators on a socially-distanced basis from the start of October. However, following an announcement on Wednesday which saw the trial of crowds at the St Leger Festival in Doncaster curtailed, playing games behind closed doors will be on the cards for a while yet. As coronavirus restrictions are tightened nationwide, the pilot events in England scheduled for the rest of September will be limited to 1,000 spectators. The government is now set to make a decision on whether fans can return to sports stadia socially distanced on October 1 – but there are no guarantees the plans will get the green light from then.

So if I can’t get to a game, where can I watch it?

Huge thanks to all who supported #LetUsWatch – we'll be talking to the PL re: plans for Oct onwards.— The FSA (@WeAreTheFSA) September 8, 2020

The Premier League has confirmed all matches being played without spectators during September will be televised live after an agreement was brokered for the existing rights holders – Sky Sports, BT Sport, Amazon and the BBC – to screen games. There were already 17 fixtures scheduled for broadcast, with the remaining 11 now also set to be available for armchair fans, in a move welcomed by the Football Supporters’ Association. Following the restarted 2019-20 top-flight campaign, all 92 Premier League matches had been shown live on TV, with 33 of them made available free to air.

What are the plans for coronavirus testing?

There has been a slight change in relation to the Premier League’s testing programme, with an increased number of tests for clubs at their training ground to 75 members of staff and players. The frequency of these, however, has been reduced from twice a week to once a week. When the campaign resumed last season, the number of overall positive tests returned were very low. The Premier League will take a review of the policy at the end of September, which will also assess the national situation of the pandemic, before deciding to make any more changes. There have been a number of positive tests from players returning to training following a shortened summer break, including Manchester City duo Riyad Mahrez and defender Aymeric Laporte.

Will there still be five substitutes, drinks breaks and what about other social-distancing measures?

Stadiums will still have a ‘red zone’ on match days, with an extra outfield player and a third goalkeeper now permitted in the most-severely restricted section of the grounds, which include the pitch, tunnel and technical areas as well as changing rooms. Only those who have tested negative for Covid-19 in the past five days can enter. All other hygiene requirements will also remain in force. Squads, though, will revert back to three substitutes from the five which were allowed following the season restart. There will no longer be drinks breaks as the new campaign kicks off in the autumn rather than summer.

How will all the fixtures across the different competitions be fitted in?

The final round of top-flight matches is set for May 23 2021 – and, if everything runs to plan, there will be plenty of football ahead.  With a truncated campaign, the Premier League winter break will not take place next season. There will be no replays in the FA Cup, which is a first for the world’s oldest knockout competition. The Carabao Cup is set for a run of midweek slots, but there will be no ‘home-and-away’ semi-finals, which will be settled after a one-off game. Throw European and international fixtures into the mix, and there is going to be little room for manoeuvre in a crammed schedule.

Are there any new VAR regulations this season?

Premier League officials accept VAR will not achieve 100 per cent accuracy, but maintain it will increase ‘key match incident’ accuracy, which last season was at 95 per cent compared with 82 per cent over the 2018/19 campaign. The VAR cannot, for example, intervene when referees give incorrect second yellow cards, so the aim will be to improve the consistency of decision making by reducing ‘grey areas’ and therefore limit their overall impact on the game. World governing body FIFA took full control of VAR from the sport’s lawmakers, the International Football Association Board, during July. This is expected to see an increase in referees using pitch-side monitors for goals, red cards and penalties as they review footage for themselves if required.

So will offside still be offside, even by an armpit?

Technically, yes. The ‘offside position’ is to be determined using same three-step procedure which was applied in 2019/20. The ‘working out’ process – complete with blue and red lines – will also remain available for broadcasters to air.

What about the changes for goalkeepers at penalty kicks?

Keepers will have to watch their footwork at penalties next season, with a Global Positioning System set to identify their position. Anyone moving off the line will get a warning and the kick retaken. Another offence will result in a yellow card as well as a retake. Do it a third time for the same penalty, then a keeper could be sent off. Encroachment will now be judged on whether any part of the player’s foot is on the ground in the penalty area or arc line, and that player encroaching must still have material impact on the outcome of the kick.

Got it. But handball is still handball, right?

VAR takes a look at a possible handball in the Aston Villa box – but it looks to be the right call— Sky Sports Premier League (@SkySportsPL) February 16, 2020

Sort of. An imaginary ‘T-shirt’ line is anticipated to be used as guidance to officials for what will constitute a handball, which as always will be open to interpretation, such as whether the hand/arm is clearly away from the body and outside of the ‘body line’ as well as if a player clearly leans into the path of the ball and how far it has travelled. The changes to the regulations could see more penalties awarded over the course of the new campaign.

Tell me the season will get completed, one way or another?

At the recent Premier League meeting, the clubs maintained a collective desire to play out the campaign through what could be a second wave of infections later this year, but as yet there have been no firm contingency plans put in place for such a scenario. All we can do is hope for the best, both on and off the pitch.