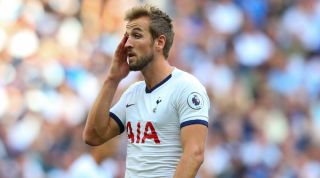 Star midfielder Christian Eriksen was angling for an exit at the end of last season, while the likes of Danny Rose and Toby Alderweireld also looked set to depart before staying put in north London.

Spurs suffered a shock penalty shoot-out defeat to fourth-tier Colchester in the Carabao Cup on Tuesday.

It came on the back of a 2-1 defeat at Leicester City in the Premier League on Sunday, and Tottenham have now won just two out of eight games in all competitions in 2019/20.

When asked about his team’s struggles, Kane pointed to the disruption caused by the transfer market during the summer months.

"So it's never easy when you have a situation like that, but now that's closed, we all just want to move in the right direction.

"Whoever is on the pitch has to give everything for the club, that's all we can ask for. You have to kind of put your individual needs to one side and make sure you're performing to the highest level, because that will help your individual status anyway."

Spurs face Southampton in the Premier League on Saturday and go into the game in seventh place.

Kane admitted he has found it hard to work out what has gone wrong with his side this season.

"It's hard to put a finger on it," he said. "We feel like we're training well, doing everything right, but maybe we haven't started games with the right energy.

"The [Crystal] Palace game (a 4-0 win for Spurs) was the best example of how we should start; on the front foot and pressing, ruthless with chances, and that's what we've done in previous seasons, especially at home.

"We just need to find a way to get that good feeling back. We just need to get off that form, start fresh, get off to winning ways on Saturday and take that momentum forward."

QUIZ! Can you name Manchester United's last 50 goalscorers in all competitions?

BEATINGS The 10 biggest wins in Premier League history (or is that heaviest defeats?)