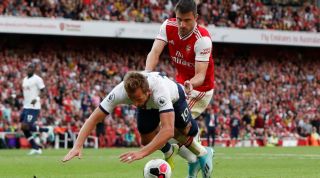 The England captain was criticised for a dive when he won a late penalty against Arsenal in last weekend’s north London derby.

He was also criticised for going down too easily under a challenge from Newcastle centre-back Jamaal Lascelles a week earlier, but the 26-year-old was insistent when asked if he has ever dived.

"Never and, hopefully, I don't have to,” said the Spurs forward, as reported by ESPN.

“I said after the Arsenal game it's a 50/50 one, similar to the one we got given against us at Wembley the year before. It happens in football.

"I am someone who uses his body well, which as a striker you have to do at every level. On the halfway line it's a free-kick every day of the week. In the penalty box you don't always get it.

"People's opinions are their opinions. I wasn't concentrating on that sort of stuff. For me, it's about doing my best on the pitch and the most important thing is about winning games."