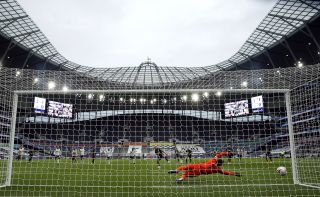 The new interpretation of the handball rule was at the centre of angry discussion during a weekend of controversial decisions in the Premier League.

Tottenham boss Jose Mourinho was left bristling as Newcastle snatched an undeserved point in North London on Sunday afternoon a day after Crystal Palace counterpart Roy Hodgson had been left equally perplexed after a home defeat by Everton.

Here, the PA news agency takes a look at the latest handball controversies, with no likelihood of any change to the law before the International Football Association Board’s AGM in March next year.

🎙 – "Whoever is in involved in this – stop it. You're ruining football." @Carra23 is 𝙣𝙤𝙩 happy with the decision to give this as a penalty – your thoughts? 🤔— Sky Sports Premier League (@SkySportsPL) September 27, 2020

Newcastle were trailing 1-0 at the Tottenham Hotspur Stadium – due in large part to the excellence of keeper Karl Darlow and the woodwork – when substitute Andy Carroll rose above Eric Dier and headed the ball against the unwitting England international’s upraised arm. The Magpies’ appeals seemed more hopeful than expectant but after being advised to review the incident, referee Peter Bankes pointed to the spot to hand Callum Wilson the chance to snatch a hugely fortuitous 1-1 draw.

Palace boss Hodgson labelled the current implementation of the handball rule as “nonsense” after the Eagles were left to count the cost of another penalty decision against the Toffees. Having dragged themselves back into the game through Cheikhou Kouyate’s 26th-minute strike which cancelled out Dominic Calvert-Lewin’s early opener, the home side were dealt an ultimately fatal blow when Lucas Digne’s header hit Joel Ward’s hand and having taken a second look at the incident, match official Kevin Friend pointed to the spot. Richarlison converted to secure a 2-1 win.

⏰ All over. So cruel on Albion, who were brilliant today and more than deserved something from the game.— Brighton & Hove Albion (@OfficialBHAFC) September 26, 2020

There was disappointment, rather than anger, at the AMEX Stadium as Brighton saw a point ripped from their grasp by Manchester United. The Seagulls thought they had earned a 2-2 draw when Solly March headed them level in the 95th minute, but they were undone in a dramatic conclusion by a decision made after the final whistle had sounded. Referee Chris Kavanagh was advised to watch a replay of an incident in which Harry Maguire’s header had hit Neal Maupay’s arm, and he ruled against the Brighton striker to allow Bruno Fernandes to win it from the spot in the 10th minute of stoppage time.

Heads were being scratched in West Bromwich on Saturday evening for more than one reason after Chelsea fought back from 3-0 down to draw 3-3 at the Hawthorns. Frank Lampard’s men claimed their point deep into injury time when Tammy Abraham stabbed home after keeper Sam Johnstone could only parry Mason Mount’s cross. However, Baggies boss Slaven Bilic was convinced Kai Havertz had handled the ball earlier in the move and while replays suggested they had a point, it survived a VAR check on the basis that it had not led directly to the goal.