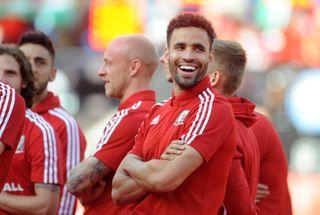 Hal Robson-Kanu is determined to be a Euros star for Wales again after thanking “phenomenal” Ryan Giggs over the way he handled his international retirement.

Robson-Kanu scored arguably the greatest goal in Welsh football history with his ‘Cruyff turn’ wonder strike during the Euro 2016 quarter-final victory over Belgium in Lille.

But the West Brom forward called time on his 44-cap career in August 2018 without playing a game for Giggs after the Manchester United great had succeeded Chris Coleman the previous January.

Robson-Kanu reversed that decision late last year and, with the delayed 2020 European Championships on the horizon next summer, Giggs has brought him back into the fold for this week’s Nations League double-header against Finland and Bulgaria.

“From my perspective, I’m just looking forward to being in the mix and showing what I’m capable of at international level,” Robson-Kanu said.

“I’m feeling good, I had a successful campaign last year. I’ll be looking forward to building on that and taking it further.

“There have certainly been (Wales) games where I’ve been itching to get back onto the pitch.

Amazing feeling to be back in the @FAWales squad for the upcoming qualifiers! Such a strong squad to be a part of, time to create some more incredible memories 🙏🤪❤️ #TheRedWallhttps://t.co/mof9uHxr3Ppic.twitter.com/Qpl4RAX5Yk— Thomas Hal Robson-Kanu (@RobsonKanu) August 25, 2020

“I only ever played previously because I gave my best. I was effective and contributed to the success of the group and that’s what I’ll be looking to do again.”

Robson-Kanu’s last cap came against the Republic of Ireland in October 2017.

The 31-year-old did not figure for the next 10 months before deciding to put his club career and family first.

“It was an important decision for me,” Robson-Kanu said. “We’d just been relegated with West Bromwich Albion from the Premier League, so I was going into a 46-game season and I had three children.

“When I made the decision initially, he (Giggs) was phenomenal.

“I spoke to him quite a few times before making the decision and he was really great about it. He said the door was never going to be closed and that he would consider me if the opportunity did arise.

“The demands and pressures outside football, sometimes you need to take a breath and put yourself into a good position.

“That’s what I’ve done and I’m in a position now where I feel good and feel ready to give my best to the nation again.”

Robson-Kanu joins a much-changed Wales squad from the one he was last part of.

Senior citizens like Chris Gunter, Gareth Bale and Wayne Hennessey remain, but Giggs has introduced plenty of fresh blood since taking over.

“There’s not too many old boys here now,” he said.

“You can see the manager has come in and he has imparted his methodology, his ethos, how he wants to play the game and the beliefs he wants us to have as a group.

“There’s some fantastic talent here and hopefully I can impart some of my experience from my career.

“But it’s given the whole group another year to progress, and hopefully there’s an opportunity to be even more successful next summer.”