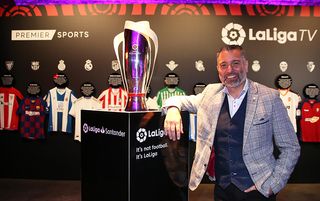 LaLigaTV pundit and Spanish football expert Guillem Balagué says newly promoted Cadiz will light up Spain’s top flight next season – when their fans are allowed back into stadiums, that is.

The southern side have returned to LaLiga for the first time since 2005/06, having spent four seasons in the third tier since, and are renowned in Spain for their raucous support.

Balagué believes El Submarino Amarillo – featuring a 35-year-old Alvaro Negredo in their squad for 2020/21 – will be a welcome addition to the league, and picked out two more sides to watch for different reasons this term.

“I’m looking forward to watching Cadiz, once they let the fans back in,” he tells FFT, “because they have the funniest fans in the world.

“They are great, creative fans, so having them back in the top division after 15 years should give us a lot of fun.

“I’ll also be interested to follow what [former Watford manager] Javi Gracia is going to do with Valencia, because he’s got rid of some very big names – Francis Coquelin, Ferran Torres, Dani Parejo. So that’ll be interesting.

“Another interesting team – because I really rate their manager, Jose Bordalas – is Getafe. He’s not going to be able to renovate the side as much as he should, so how does he change it with more or less the same kind of players?

“Bordalas, for me, should be at the next level in terms of a managerial career.”

While Spain’s summer has been dominated by talk of Lionel Messi’s potential departure from Barcelona, Balagué says the Argentine may need to avert his eyes  towards a pretender for his free-kick crown.

“Oscar Rodriguez at Sevilla is someone that may surprise many,” he explains. “He did very well at Leganes on loan [from 2018-20]. He has the same stats on free-kicks as Messi.

“For other surprises, obviously people know Ansu Fati now, but he is extraordinary. He’s at the same level as Cristiano [Ronaldo] and Messi for his age – and has perhaps made an even bigger impact. He’s a very calm guy and it’ll be interesting to see how he gets on when you’ve got the likes of [Antoine] Griezmann in that position.

“The Japanese player, Kubo – who has jumped from Mallorca to Villareal on loan from Real Madrid – should also be one to watch. He has got a lot of talent.”

NEWS Lionel Messi signs a three-year contract... but not with Barcelona

Guillem Balagué is a pundit on LaLigaTV. LaLiga kicks off this Friday and you can watch all the action FREE on LaLigaTV until October. Sign up here: premiersports.com/subscribenow