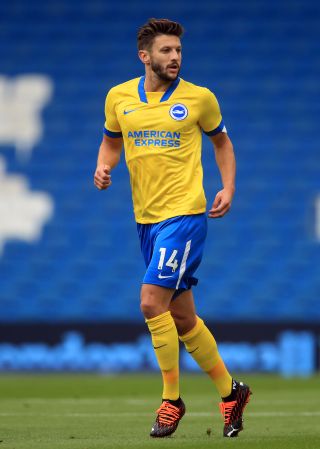 Graham Potter expects creative midfielder Adam Lallana to have a “very powerful” influence at Brighton given his successful experiences with Liverpool.

Albion won the race to sign England international Lallana on a free transfer in the summer after his Reds contract expired.

The 32-year-old left Anfield as a Premier League champion, having collected a Champions League winner’s medal under Jurgen Klopp the previous season.

He is likely to make his Seagulls debut against Chelsea on Monday evening and head coach Potter believes the player will make a major impact at the club.

“I can speak a lot about what you need to do and I can give advice but you’ve got somebody in our environment that has seen it first-hand and has achieved it,” said Potter.

“There are some little things that can be improved on there and I think Adam brings that.

“And he also brings a quality on the football pitch. We are pleased with him and pleased that we have him here. We have to make the most of that and help him enjoy his football.

While Lallana adds inventiveness to Brighton’s midfield, the club have not yet added to their striking options.

Albion struggled to find the net on a consistent basis last season and did not guarantee top-flight survival until a goalless draw at home to Newcastle in their penultimate fixture.

Potter, who has allowed veteran striker Glenn Murray to join Watford on loan, has not ruled out adding to his attacking options but is eager to elicit more from the forwards currently at his disposal.

“The likes of Neal Maupay, Aaron Connolly, Leo Trossard, Alireza (Jahanbakhsh), if you look at their goals last year, you think they can improve those tallies,” said Potter.

“And rather than look for the silver bullet that’s out there, we sort of think, ‘can we improve those guys? Can we help them score more?’ because three of those four were making their first starts in the Premier League.

“You’d like to think they can take a step forward and that might mean the goals can come from within.

“You’re always looking to see if there’s somebody that can bring something extra and help the guys already here, so we’ll keep working in that regard but the most important thing is to help the guys we’ve got take the next step.”