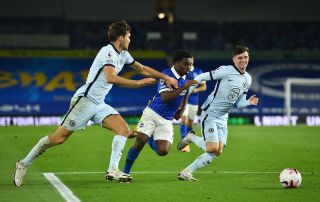 The Seagulls lost out 3-1 to Frank Lampard’s Blues, but ex-Stamford Bridge star Lamptey stood out at the Amex Stadium.

And now Potter has said Brighton are ready to help the 19-year-old vindicate his decision to leave Chelsea, having left west London in a £4million deal in January.

“He took a decision to leave a place that he liked and he respected a lot, but I think he knew the reason why he was taking that decision, which was probably a really tough one for him,” said Potter.

“He’s got a lot of respect, I know, for Chelsea. But obviously then it’s our job to try to help him make the most of that decision.

“It’s a balance between game time, development, training, and feedback and all that sort of stuff, because like I said he is still young and he’s got a lot to carry on improving.

“He’s a wonderful young player and it’s a delight to have him.

“He’s a really good lad to work with, because he’s so humble, and it’s just so refreshing, how he plays football.”

The Hillingdon-born full-back had six months left on his Chelsea deal when he opted not to sign fresh terms and headed instead to Brighton earlier this year.

Reece James showed one of the reasons why Lamptey opted to move on from Stamford Bridge, blasting a long-range thunderbolt as the Blues prevailed on the south coast.

Jorginho put Lampard’s new-look Chelsea into the lead from the penalty spot, before Leandro Trossard equalised with a dipping effort Kepa Arrizabalaga should have saved.

James’ fine blast put the Blues back in front though, before Kurt Zouma’s deflected strike sealed the travelling side’s win.

Where Lamptey could have been starved of first team action at Chelsea, the England Under-21s defender ought to have plenty of opportunities at Brighton now.

“He brings a freshness, a personality, and he brings a quality.

“So our job is to try to help him improve, because I’m sure he’ll say the same in that he’s got a lot to learn, he’s only young.

“But he’s also got some really good attributes that are exciting, and we need to try to help him make the most of those.”

The £53million man will hope to shake off a dead leg in time to take on Liverpool at Stamford Bridge on Sunday, and admitted his surprise at his first taste of the Premier League.

“I played against three massive defenders, and you don’t have something like that in Germany,” Werner told Chelsea’s club website.

“The game is totally different. In some situations, we had a lot more space, the field is very big and you can make a lot of runs.

“If I had one step further I could have scored on my own, but in this case it was not possible.

“In the end it was a clear penalty, and for now I am happy to give an assist for my team.”