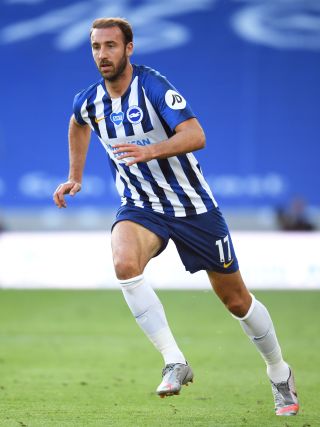 Murray has been the club’s highest goalscorer in the post-war era, with 111 strikes to his name across his two spells on the south coast.

The 36-year-old has a year remaining on his contract with the Seagulls, but has chosen to move to Watford in a bid for a regular place in the squad.

Brighton manager Graham Potter told the club website: “It is understandable that Glenn would like to play regular football at this stage of his career and this move gives him that opportunity with Watford.”

Potter added: “He could easily have stayed here, been part of the squad and we would have been very happy to have his experience and his personality within the dressing room – but we could not guarantee him regular football.

“He makes the move with our full blessing and best wishes.

“Glenn has been outstanding for this football club, a great pro and pleasure to work with. He quite rightly has earned legend status here.”

The experienced striker has netted double figures in a season nine times during his 13 years as a professional, and already has a Championship golden boot to his name from 2013, when he struck 30 times for Crystal Palace during their promotion season.

Potter added: “He will always be welcome back here at the club, at the training ground and the Amex, and I am sure the fans will look forward to showing their appreciation at some point in the future.”

The Hornets later confirmed that Hayden Mullins had left the club.

Mullins was in interim charge of the club for two separate spells last season following the sackings of Quique Sanchez Flores in December and then Nigel Pearson in July.

The 41-year-old had been with the club since the summer of 2016, primarily coaching the Hornets’ under-23 side.

“His popularity among the first-team playing squad was typical of the respect he earned from all parts of the club during his time here.

“We all wish him every success for the future.”