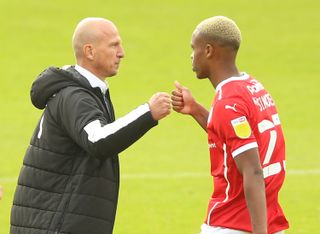 Barnsley head coach Gerhard Struber was satisfied with his side’s 1-0 Carabao Cup victory over Nottingham Forest following Cauley Woodrow’s goal early in the second half, but admitted there is room for improvement.

Woodrow struck in the 49th minute, turning in the rebound after Clarke Oduor’s effort came back off a post.

Woodrow also headed over from a good position after meeting Chaplin’s pinpoint cross but his one goal was enough.

“I think the performance was OK. Many things I see that we must improve but it was a good first step and a good direction,” Struber said.

“The team worked very well with good structure and we created chances.

“In the end I think it was a deserved win for us and a good feeling for Cauley Woodrow. I think he is a key player in the team and he is a player who can score goals.

“We had a very good second half with more combinations on the ground.

“The biggest focus is the Championship and we will be very professional in the EFL Cup. I am happy with the performance and the result.

“Coronavirus is a never-ending story, but I hope that the supporters come back and that we have the atmosphere in the stadium that everyone wants.”

Forest’s Ryan Yates also threatened early on with a low shot from the edge of the area which was held by Jack Walton.

Barnsley’s first chance fell to Conor Chaplin whose flicked header was tipped over by Brice Samba.

Chaplin also forced Samba to make a save shortly after the re-start following good work from Woodrow.

Barnsley substitute Dominik Frieser also had a good chance when a ball from Simoes found him unmarked, but his shot was parried by Samba.

Forest head coach Sabri Lamouchi, looking to start afresh after a catastrophic end to the previous season, said: “We started well but unfortunately we didn’t create too much and we concede after many bounces inside the box, so small details again.

“Unfortunately, it was not very positive to start like that but at least they tried. Obviously, we are not ready after just three weeks.

“It’s not good to start the season like that but we need absolutely to not accept to lose and to change the mentality.

“For me, nobody was 100 per cent ready. It is not good preparation for the beginning of the season.

“We will go to QPR to try to disturb them a little bit more than we disturbed Barnsley.

“We prepared the team to be ready today but after three weeks, with the new players, it is not enough. We need to do more, for sure.”