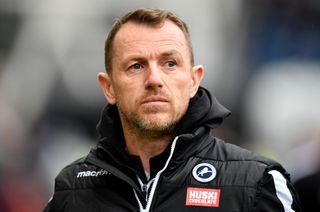 Millwall manager Gary Rowett is pleased his side are bucking a trend with their start to the season after their 1-0 win at Rotherham.

Jed Wallace’s opportunistic goal sealed the points for Millwall as he snapped up the game’s glaring big chance early in the second half.

Wallace seized on a mistake by Michael Ihiekwe, who let a through-ball slide underneath his foot, before rounding Millers goalkeeper Jamal Blackman and tapping home into an empty net.

For Rowett it was a pleasing outcome, if not display from his side.

He said: “I thought it was a very difficult game. Rotherham want to drag you into a really physical game which they’re really good at.

“Rotherham test you and make it really difficult with their big physical strikers.

“We get a little bit of fortune with the goal but Jed (Wallace) nevertheless anticipates it well and takes it well.

“It would have been really easy to crumble in to the pressure. We didn’t do enough in an attacking sense to win the game really.

“I asked them at half-time to play with a little bit more brightness because they press well and they are really well organised. We just didn’t play with any real composure.”

Rowett wanted to get some points on the board early on and feels four points from two games represents a strong start.

He added: “We are trying to be better at what we do. I don’t think we’re arrogant or good enough to be too disappointed with our start but at times we made it hard for ourselves and so did Rotherham.

“The only thing that is really important to me is that historically Millwall have not started seasons quickly and what we have done so far is we have started on the front foot with our results.

“I am pleased with the start but a little bit disappointed with the performance.”

Rotherham manager Paul Warne felt his side pushed hard and was happier than their display last week, where they beat fellow Sky Bet Championship newcomers Wycombe.

He said: “If I thought we played badly, I’d say. We matched them as well as we could. I felt sorry for them that they didn’t come away with something.

“I’m probably happier this week than last week. Millwall defended the crosses really well so fair play to them. I think they’re a top-eight side.

“It is about taking chances. You don’t get many in the Championship. I was hoping the net would rattle in the second half but it wasn’t to be. To come away with nothing is disappointing.

“I thought they started better than us in the second half. I don’t know why.

“In the end we asked a few questions but we didn’t create a gilt-edged chance. I thought it gives us real optimism that we can go toe-to-toe with a real good side in the league and feel hard done to by it.”

On Ihiekwe’s mistake, Warne added: “In fairness he won the game for us last week. It is just a shame that it ends up being pivotal on the result.

“He is a big strong lad. He will be all right.”