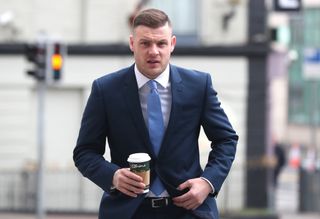 Livingston manager Gary Holt has paid tribute to Anthony Stokes for trying to overcome his difficulties with the club’s plastic pitch before volunteering to cancel his contract.

The former Celtic striker left Livi earlier this week without playing for them after less than a month at the club.

The club cited the 32-year-old’s difficulty in training on their artificial surface and Holt admitted his disappointment at not getting the chance to unleash the Irishman on his Scottish Premiership opponents.

“I’m disappointed because, the sessions we had with Anthony, you could see the quality,” said Holt, whose side travel to Celtic Park on Saturday.

“We were hoping we could get over the problems we had, dealing with the pitch and the conditioning. And I give Anthony a big pat on the back, because he broached the subject with us first, that it wasn’t right with him, it wasn’t comfortable.

“He could have sat here for months taking money while we banged our heads trying to get him up to speed but he was willing to terminate the contract.

“We actually tried to say no, can we do something, but it’s not everybody’s cup of tea, we know that. It’s been bashed from pillar to post in Scotland, the plastic pitch. Some players can play on it, some can’t.

“When you’ve been out the game so long as Anthony had, it is a big ask to come in at the intensity levels we play at. He was finding the hips were getting sore and the hip flexor was causing him a lot of gyp and we just couldn’t get over it.

“He tried, he gave it a go. I was having to pull him out of sessions because his hip was playing up and he wanted to train. I’d like to thank him for the efforts he gave.

“I look at it as a great opportunity to work with someone who had all the tools, and what could I have done better? But sometimes it doesn’t have to be a nasty separation, it was amicable.”

Stokes had come in after Livi sold Lyndon Dykes to QPR and Holt will look to bring in another forward.

“We’re actively looking, the window is open,” he said. That’s another thing, he has given us an opportunity to look, not waited until October 5.”

Holt confirmed they had recorded no Covid-19 cases after three Hamilton players tested positive in the wake of their victory at the Tony Macaroni Arena.

“You have got to be concerned, we played them Saturday,” Holt said. “But we have all got rigorous testing in place and thankfully everyone has come back negative so far.