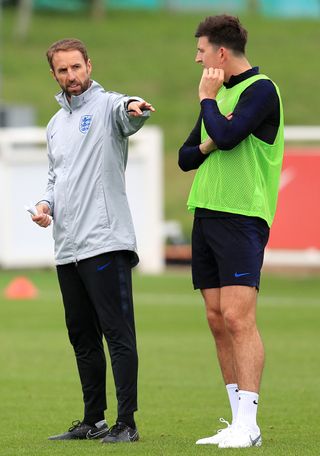 Gareth Southgate will welcome Harry Maguire back into the England squad next month and has no regrets about the way he handled the decision to select then swiftly withdraw the defender.

Already the most complicated international camp of the Three Lions boss’ tenure due to the impact of Covid-19, the dilemma over the availability of the 27-year-old only added an extra layer of difficulty.

Southgate publicly backed Maguire when calling him up for the Nations League double-header with Iceland and Denmark, only to make a quick about-turn following the verdict of a Greek court.

The defender was withdrawn from the squad after being handed a suspended 21-month sentence, having been found guilty of assaulting a police officer, swearing, resisting arrest and bribery during an incident in Mykonos.

Maguire maintains his innocence and has lodged an appeal with the Greek court system, with Southgate sticking by the Manchester United captain despite that decision to take him out of the squad.

“We’ve been in touch right the way through the last two and a half weeks,” the England manager said in his first press conference since then.

“This has been clearly a really difficult period for him and I think the last few days have been very important for him to be able to relax, get away from all the attention and get a rest.

“Mentally get a rest because of course he had a short break anyway but then the events that happened in Greece had really dominated that.

“I think he needed that switch-off and he’ll be able to go back to his club and absolutely we’ll be looking to involve him in October.”

England skipper Harry Kane also revealed he had contacted Maguire after the incident.

“I spoke to H a couple of days after everything had happened and to see if he needed any help,” he said.

“He was fine and said it was a crazy few days. He said he would explain to me when he was in the camp but that is not the case.

“But the lads who are close to him said he is in a good place. The last few weeks has been an experience for him but I guess it is something which will make him stronger.

“We back H all the way and we look forward to seeing him in the October camp and hopefully he can get his head down and get back in the team at Manchester United.”

Southgate’s handling of the situation has been widely debated, after he withdrew Maguire from the squad just hours after calling him into it.

Asked if there was any moment when he felt embarrassed or that he had made the wrong decision by initially selecting the defender, the England boss told talkSPORT: “No. Not at all.

“I think everybody is now aware how complex this case was, which wasn’t as it was initially reported in any way.

“I felt it was  important to support our player, so I always knew that the timing of the case was potentially going to mean we would have to change something in a relatively short period.

“But we had a squad to pick of 25 and lots of things to prepare for, medically and everything else, so we couldn’t delay just for one situation.

“That ended up being as it was. I have to live with that. It didn’t bother me the reaction to it, I knew that would come.

“But the chain of events and the way I described them, I think would be the same if I did it again.”

Southgate may make a tactical reshuffle in the absence of Maguire and some other defenders in the coming days, with Saturday’s trip to Iceland followed by a Nations League match in Denmark.

“I think we’ve talked right the way through very openly and honestly, and, of course, Harry would prefer to be here with the team,” the England manager added. “He wants to play football and he wants to be part of it.

“But I think with everything that’s gone on in his life in the last couple of weeks it was so important that he’s been able to let everything just calm down, get some more time on holiday.

“He hasn’t really had any sort of a break. He had four, five days and then this huge intrusion into his life from everywhere.

“So, he now has the chance to re-energise, get back to training with his club and then all being well he’ll be with us in October.”