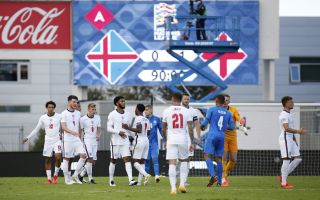 Gareth Southgate is contemplating changes in personnel and tactics against Denmark as the England manager looks to inject energy into a side that toiled to victory in Iceland.

The Three Lions made their long-awaited return to action on Saturday, although their display after 10 months away was rusty against the disciplined and dogged hosts in Reykjavik.

Raheem Sterling’s last-gasp penalty was followed by an even later spot-kick miss by Birkir Bjarnason as a forgettable Nations League fixture ended in a dramatic 1-0 win against their Euro 2016 foes.

But the tepid performance underlined the lack of sharpness brought by a truncated – and in some cases non-existent – pre-season at club level, leaving Southgate pondering how to approach Tuesday’s clash against Denmark.

Calm and composed when it matters.— England (@England) September 5, 2020

“We’ll have to assess really carefully because there’s lots of different factors in that,” Southgate said.

“We’re going to need energy for sure at this stage of the season – that’s going to be as critical as anything – and then what’s the best tactical approach to the game.

“So, we are going to have to work our way through that.

“We knew that was going to be a huge challenge. That’s part of the reason we thought the five subs would be in for this.

A look at our #NationsLeague group after the first round of matches.— England (@England) September 5, 2020

“I didn’t quite understand that. They put them in for the under-21s last night. For us, the Nations League was the perfect opportunity to do it.

“When it was voted through, I didn’t think for the league it would be appropriate but I felt for the Nations League, especially for every country this September camp was going to be difficult on player fitness.

“Anyway, that isn’t the case so we’re going to have to work our way through that.”

Southgate has to decide how many of Saturday’s starters can push through onto Tuesday, when the England manager may well be tempted to revert to a three-man backline flanked by wing-backs given the options at his disposal.

Conor Coady and Ainsley Maitland-Niles look to have been brought in with that formation in mind, while fellow uncapped players Dean Henderson, Kalvin Phillips and Jack Grealish are also dreaming of their bow in Denmark.

Manchester United teenager Mason Greenwood came off the bench for his debut in Reykjavik, where Phil Foden got his first taste of life with the Three Lions from the start.

“I think with Phil we know there’s a super player there, and today I thought he did very well,” said Southgate, who also gave Southampton captain James Ward-Prowse his England first start against Iceland.

“It was a really difficult game to come into, no space at all in the middle of the field.

“They are very compact, depth and width, so he showed early on with some through passes and little touches what he’s capable of.

“And again, I think just towards the second half he started to tire a little bit and we wanted to get another forward on just to try a different sort of threat.

“James did a really good job for the team.

“We had to move him around into two or three different positions, ask him to take responsibility but he did that very well and, yeah, very pleased with both of them.”

The positives will be clearer to draw once the fog of the closing stages in Iceland has passed, with Southgate left feeling like England had “got out of jail” after Joe Gomez gave away a penalty moments after Sterling had scored.

Kyle Walker’s sending off for two bookable offences also frustrated the Three Lions boss, who will now be without the suspended right-back in Copenhagen.

“Kyle has spoken I think very well about it already,” he said. “He knows the situation.

“That’s not a situation that we’ve had in the four years I’ve been in charge, so the response to it from the rest of the team was good.

“But of course it put us in a really difficult situation and also we lose him now for the game on Tuesday as well.”