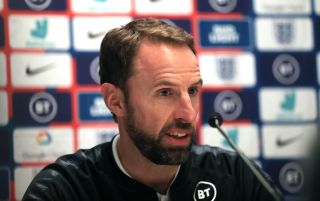 Gareth Southgate has loved seeing the players’ excitement at being back together after 10 months apart as rejuvenated and uninhibited England look to return with a bang against Euro 2016 foes Iceland.

Saturday’s Nations League clash in Reykjavik will be the national team’s first match since rounding off European Championship qualification with a 4-0 win in Kosovo on November 17, 2019.

Football may have resumed amid the coronavirus pandemic but it continues to pose challenges, although the attitude of players and staff has helped smooth the strangest camp of Southgate’s reign.

Such enthusiasm has also underlined the sea change overseen since England’s last meeting with Iceland at Euro 2016, when a 2-1 last-16 loss marked one of the darkest days in the Three Lions’ history.

“One of the biggest signposts to that is the way the guys have been desperate to be here this week – not only those that are here but those that couldn’t be here,” Southgate said before travelling to Reykjavik and undertaking yet another Covid-19 test.

“The core have been together a little while, the younger ones have been in and around the squad, some of them have been to train with us before. They know each other pretty well through the England youth system.

“And of course we’ve been winning matches so that’s always more enjoyable and has a tendency to bring people together.

“There’s a different level of confidence that needed rebuilding.

“We had a disappointing World Cup where we’d gone out in the group stage then in the Euros, then two quick changes of manager, so everything needed to stabilise a bit.

“But I’ve been really pleased with how excited our older players, or more experienced players, were at coming back in.

“And then it’s been wonderful to see the reaction of the new call-ups, just the joy. It takes you back to why you start playing the sport and sometimes we can forget that.

“To play international sport for your country, in any sport, is the pinnacle and it’s been a lovely reminder this week with those players for the first time.”

Seven uncapped players are with the squad in Iceland, where those involved in the latter stages of European competitions have arrived with little rest and even less pre-season preparation.

Southgate knows he has a duty of care but actually believes those players will be “better prepared to play the minutes than any of the others”, with the intensity of the season ahead more of a concern.

“It’s going to be challenging for every manager in world football, really,” he said.

“We’re all aware of those constraints, we’re all aware that generally speaking the best players are the ones with the heaviest load so across the season that’s going to need some managing.

“I think in future – of course this is such a unique circumstance – it would have been great as there was an opportunity with the World Cup being positioned where it was to adjust the calendar and take some of the sting out of some of that intense period.

“But of course that needs everybody to collaborate and come together and that hasn’t been so easy in the short period of time that the various federations and governing bodies have had.

“Everybody knows the challenge. All the club managers are the same – they recognise it for us and for them – and we have to try and work through it in the most positive way possible.”

Southgate has a variety of decisions to make in the short-term, from his defensive formation and goalkeeper in Iceland to how much experience to deploy.

The nominees for the PFA Young Player of the Year!@tamyabraham@trentaa98@masongreenwood@masonmount_10@marcusrashford@bukayoSaka87— Professional Footballers' Association (@PFA) September 4, 2020

Mason Greenwood is by far the youngest member of the squad but the 18-year-old Manchester United forward has more than held his own, with Southgate impressed by the two-footed teenager.

“I have to say it is really rare to see a player as comfortable with both feet – not just in terms of the ability to receive and pass but finishing with both feet,” the England boss added. “There aren’t many that I have seen.

“I had to ask a similar question. I feel slightly embarrassed, you pick a player for England and you’re not sure which foot he kicks the ball with but maybe some people won’t be surprised at that.

“With him, the quality of finishing, the way he’s got this icy cold stare, very calm disposition generally, which I think is clear when he’s in and around the penalty box. For somebody of his age, that’s remarkable maturity.”