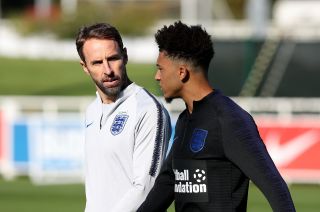 England manager Gareth Southgate has been impressed by the mature way Jadon Sancho is handling speculation about his future.

The 20-year-old has been under intense scrutiny in recent weeks as Manchester United look to prise the forward away from Borussia Dortmund.

The asking price of around £107million is proving a substantial stumbling block but speculation will continue for a while yet, with the transfer window open until early October.

But, at a time when Southgate has other headaches to contend with, the England boss is confident Sancho’s focus will not be one of them when the players meet up for international duty.

Asked if he will speak to the player, the Three Lions boss joked: “Well, I’m always intrigued to know what’s going on so I’m nosy like that!

“But, no, I mean I think there will be others within the squad. It’s normal for this time of year, normally leading into the September window, it’s coming to a close.

“This year it will head into October, so I’m sure there are going to be other players that are involved in transfer speculation.

“To me, from the outside, he seems to be handling that really well, I have to say.

“We follow everything closely, we have good contact with Dortmund. It seems as if his approach to training has been excellent.

“I’ve seen the matches that he’s been involved with that have been televised, so I think he’s been very mature in the way he’s dealt with all of that.

“It’s not easy when you’re a young player but I think he’s handled it very well.”

Sancho is among those due at St George’s Park on Monday for September’s Nations League double-header against Iceland and Denmark.

The international break comes between the Community Shield and the Premier League kick-off, with the schedule posing problems for club and country.

“I can sit and complain about that or I can be adaptable and make sure we maximise what we’ve got – and we’ve got to do the latter.

“We will always try to collaborate with the clubs. Certainly our physical performance guys are getting lots of information from the clubs, which is very important for our planning.

“And equally I think across the board there’s got to be a look at the football calendar, and that’s everyone’s responsibility: UEFA, FIFA, Premier League, the FAs, the leagues across Europe.

“Everybody is trying to put their competitions in and the calendar is growing and the spaces are getting smaller. And I’m not going to resolve that by resting one or two players in September.

“The discussions have got to be better at the highest level and I’m hopeful that somebody like Arsene Wenger, having the role that he has at FIFA, can start to do that – because I’ve been on a couple of calls with him where we’ve started to have the discussion. But it’s really got to happen at that level.

“The leagues have a responsibility as well and to not have a winter break this year is a massive decision really.

“So again they are things that are outside my control but which should be on the table for collaborative discussion, really.”

One thing not up for discussion is the kind of behind-the-scenes documentaries that Amazon filmed with Manchester City and Tottenham in recent years.

“I think that when players are with their clubs it’s difficult enough. When they’re with us, it’s an alien environment anyway that they have to adapt and adjust to.

“It’s not a situation as a manager that I would particularly want, that intrusion. I think we have cameras in our faces for 22 hours of the day seemingly now anyway. If it becomes 24 where do we stop?”