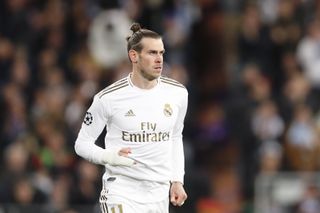 Jose Mourinho wants to bring Real Madrid forward Gareth Bale back to Tottenham Hotspur, according to reports in Spain.

Cuatro write that Mourinho has given the green light to Spurs’ pursuit of their former star, who is once again out of favour at the Santiago Bernabeu.

Bale came close to swapping La Liga for the Chinese Super League last summer, only for Madrid president Florentino Perez to pull the plug on a deal with Jiangsu Suning at the last minute.

The Wales international was again on the fringes of Zinedine Zidane’s squad in 2019/20, making only 12 starts as Madrid won the title.

Despite a lack of game time, Bale had previously seemed content to see out his contract with los Blancos, which runs until 2022.

However, the report in Cuatro suggests the 31-year-old is open to a loan move back to Tottenham.

The north Londoners will not be able to afford to sign Bale permanently, but they could do a deal if Madrid agree to subsidise his salary.

The Spanish champions are desperate to get the Welshman’s £350,000-a-week wages off the books, but it will not be easy to find a club willing to match those terms.

Meanwhile, Mourinho has told chairman Daniel Levy that he would be happy to welcome Bale to his squad as he prepares for his first full season in charge.

Mourinho tried to sign the forward three years ago when he was still in charge of Manchester United and remains a fan of the four-time Champions League winner.

And the Portuguese hopes to take advantage of the rescheduling of Euro 2020, which will now take place next summer.

Although Bale is a guaranteed starter for Wales come what may, he might want to play more regularly in the coming campaign to be at his sharpest for the pan-European tournament.