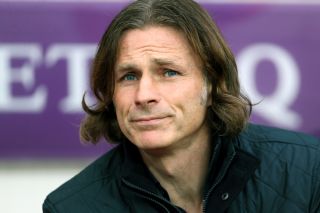 Gareth Ainsworth has challenged Wycombe’s players to put their money where their mouth is ahead of a historic first season in the Sky Bet Championship.

The newly-promoted Chairboys welcome Rotherham to Adams Park on Saturday for the maiden second-tier fixture in the club’s 133-year existence.

Manager Ainsworth defied the odds to guide Wanderers to League One play-off glory at Wembley in July and insists he is far from finished.

The 47-year-old revealed his squad have spoken confidently of being able to compete at the higher level and has now thrown down the gauntlet ahead of the visit of the Millers.

“I said to the boys, ‘nobody will ever take that night away from you at Wembley’,” said Ainsworth.

“I said to the boys while we were in League One that everyone’s looked at the Championship and every one of you has said, ‘I could do that, I’m not a million miles away from that’. Prove it. Now is your chance.

“It will be a fantastic season for us, no matter what.

“At the end of the game on Saturday we’re going to be in the highest position we’ve ever been in – win, lose or draw. What a great message that is.

“I’m not finished yet, I want to keep building with this club and keep what we’ve got going.”

Wycombe’s unexpected elevation to the division immediately below the Premier League has allowed Ainsworth to spend the first transfer fees of his eight-year tenure.

Before this summer, which has included the purchase of Republic of Ireland winger Daryl Horgan from Hibernian, the only funds used by English football’s longest-serving manager were nominal performance-related add-ons in the contract of former player Michael Harriman, who was signed from QPR in 2016.

Ainsworth admits to being inundated with names of potential new players and expects to do more business in the transfer market.

Yet, despite an increased standing in the game, he is determined the Buckinghamshire club will stick to their principles as they battle against the “stratospheric” financial gulf to the Championship’s richest sides.

“I had one agent who put a £2million price tag on somebody, sent it to me, and I thought, ‘are you crazy? This is still Wycombe Wanderers’,” he said. “My phone has been ringing off the hook.

“To actually have a price given and then say, ‘yeah, we can do that’ was fantastic with Daryl Horgan from Hibs.

“We’re probably one of the lowest budgets in the Championship for a long time but it’s not all about money. The gulf now is just phenomenal, absolutely phenomenal.

“Some teams in our league, they will be in the high tens of millions of pounds – 80, 60, 70 million pounds. It’s just stratospheric the difference between where we are.

“We are going to be this team that people remember and go, ‘they were different but wow they were hard to play against, wow they survived in the Championship, wow they made this noise’.”