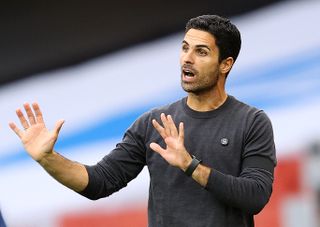 Arsenal have announced the signing of defender Gabriel Magalhaes from Lille.

The 22-year-old centre-back has signed a long-term contract at the Emirates Stadium for a fee understood to be in the region of £22million.

Gabriel will link up in north London with fellow Brazilians David Luiz, Gabriel Martinelli and Willian, the latter having recently joined on a free transfer from Chelsea.

The defender joined Lille in January 2017, having started his career in Brazil with Avai.

Arsenal manager Mikel Arteta said on the club website: “He has many qualities which will make us stronger as a defensive unit and as a team.

“He has proved with Lille that he is a defender with many outstanding attributes and we are looking forward to watching him grow as an Arsenal player.”

The PA news agency understands Arsenal are in advanced talks to bring Dani Ceballos back to the club on another season-long loan from Real Madrid as Arteta continues to look to strengthen the squad.

The Gunners are also close to announcing a new and improved deal for captain Pierre-Emerick Aubameyang, who helped the FA Cup winners beat Liverpool in the Community Shield at Wembley.

Arsenal technical director Edu revealed there had been plenty of interest in Gabriel’s signature.

“He is a player we have been studying for a while and he was in demand by many clubs, so we are proud to have agreed and completed this transfer with Lille and the player,” said Edu.

“Gabriel is a player of high quality and Mikel and his coaches are looking forward to integrating him into the club.”

Gabriel revealed fellow Brazilian Edu had helped convince him Arsenal was the club to take his career forward.

Speaking to Arsenal Digital, the defender said: “(Edu and I) had several chats about Arsenal and the new project, we had many good conversations.

“As the days went by I was getting very excited about it, then I had a call from the coach and that was very reassuring.

“Having the coach himself calling you to say he wants you in his squad motivates you a lot. That is the very reason I am here today.

“We did not talk about (details), he just told me he is aware of my quality, my capacity and how far I can go. He also said he will be very demanding with me.

“I know he is a great coach and I will make progress with his help.”

Gabriel continued: “So many fans were sending me messages asking me to join Arsenal, and that played a big part in me signing for this club.

“I know the history and traditions of this club and it is a pleasure being here. I am very happy and hope I can contribute to many titles with the Arsenal shirt.

“It was a very surreal experience, there were offers coming from a few different clubs.

🗞 Central defender Gabriel has joined us from French side Lille on a long-term contract!— Arsenal (@Arsenal) September 1, 2020

“I spoke a lot with my family and my agents, I also spoke with some of Lille’s directors but, as I said, this club’s history and traditions and the team project for the next few years were very motivational for my decision to come
here.

“So here I am, wearing the Arsenal shirt, I will give my best for it.”

Earlier on Tuesday, Arsenal had confirmed Ken Friar is to step down as executive director and become the club’s life president at the age of 86.

Friar has worked for the Gunners for 70 years, having started out in the box office in 1950 before becoming club secretary in 1973 and then managing director 10 years years later.

He held that position until 2000, when he changed role and took charge of Arsenal’s move from Highbury to the Emirates Stadium.